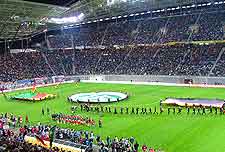 Many popular cultural events, festivals and concerts take place around the city of Leipzig, with the main venues including the Opernhaus Leipzig (Opera House) on Augustusplatz, and also the Gewandhaus concert hall and other centrally located venues. Many festivals and concerts in Leipzig also take place outdoors during the summer months, often next to the Völkerschlachtdenkmal War Memorial or within the beautiful Rosenthal Park.

Trade fairs are also particularly popular in the area, such as the Leipzig Book Fair in March, and also the AMITEC vehicle fair in April - attended by some 300,000 visitors. Whatever the time of year, the ultra-modern Leipzig Exhibition Centre and its five enormous halls often have plenty on offer, being located on the northern side of the city.