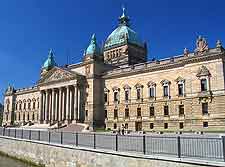 A traditional historic German city, Leipzig is full of character and prominent local landmarks and historic monuments - even its New Town Hall (Neues Rathaus) is more than 100 years old. Located on the Market Square, the Old Town Hall (Altes Rathaus) is another impressive building and dates back to 1556.

Other notable landmarks within Leipzig include the striking Battle of Leipzig Monument, which is otherwise known as the Völkerschlachtdenkmal War Memorial and is the biggest war memorial in the whole of Europe. The Main Train Station (Hauptbahnhof) is also of epic proportions. 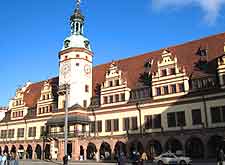 Address: Markt 1, Leipzig, D-04109, Germany, DE
Located on the eastern side of the Markt (Market Square), the Old Town Hall, known locally in Leipzig as the Altes Rathaus, is one of the city's finest Renaissance landmarks. With a prominent, domed Baroque clock tower and a dramatic line of archways, the Old Town Hall was built in the mid-16th century and is today home to the Museum of Local History (Stadtgeschichtliches Museum) and also a huge function room, where many local events are held.
Open hours: Monday to Friday - 08:00 to 16:00
Admission: no charge 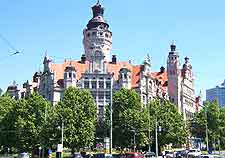 Address: Martin-Luther-Ring 4, Leipzig, D-04109, Germany, DE
Tel: +49 0341 1230
A grand building built just over 100 years ago, the construction of Leipzig's Neues Rathaus (New Town Hall) lasted around six years. One of the largest landmarks within the city and the seat of the local city administration, the Neues Rathaus is actually listed in the Guinness Book of Records, for featuring the tallest tower on any town hall in the whole world, measuring more than 110 metres/ 361 feet.
Open hours: Monday to Friday - 08:00 to 16:00
Admission: no charge

Address: Waldstrasse, Leipzig, D-04105, Germany, DE
Close to Leipzig Zoo and dominating the area, the Aussichtsturm tower offers superb views of the surrounding area and cityscape. This metal tower is worth searching out and is a great free attraction, for those on a budget.
Open hours: daily - dawn to dusk
Admission: no charge 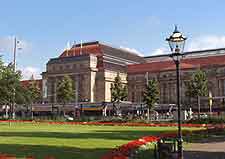 Address: Willy-Brandt-Platz, Promenaden im Hauptbahnhof, Leipzig, D-04109, Germany, DE
Tel: +49 0341 961 2589
One of the largest train stations in Europe, the Hauptbahnhof is a major local landmark. With 24 platforms and a palatial exterior, Leipzig Hauptbahnhof was inaugurated in 1915, after 13 years of construction. Inside this magnificent building you will discover a large shopping centre, plenty of eateries and many regular trains, which are used each day by approximately 150,000 travellers.
Open hours: daily - 09:00 to midnight
Admission: no charge

Address: Strasse des 18 Oktober, Leipzig, D-04103, Germany, DE
An impressive local war memorial commemorating the battle of Völkerschlacht in 1813, the eye-catching Battle of Leipzig Monument is hard to miss and was built 100 years later, in 1913. Measuring around 100 metres / 328 feet high, the Völkerschlacht War Memorial features steps to the top, where after a lot of climbing, you can enjoy pleasant views from the windows, which are interspersed with stone statues. Guided tours are available, along with various events and seasonal exhibitions.
Open hours: daily - 10:00 to 18:00
Admission: charge to climb tower