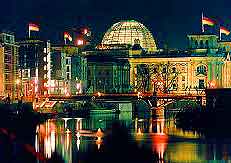 The city of Berlin is built around the River Spree in Bundesland, the federal state of Brandenburg. As Germany's capital the city has undergone enormous changes in the past 100 years. No longer divided, this city is now a thriving, modern and exciting destination, welcoming tourists and business visitors alike. Since World War II, the city has emerged from the past and undergone the biggest construction project in Europe.

Much of Berlin has been rebuilt, restored or rejuvenated and there is some wonderful architecture, both old and new, standing side by side. Many come here for the exceptional nightlife alone, while others prefer the tourism aspect offered by the city. Those who choose to sightsee by day will discover that many of the landmarks come with their very own observation decks, such as the Reichstag (the German Parliament Building), the Europa Center on the Zoologischer Garten, the Kollhoff Tower on the Potsdamer Platz, the Siegessäule (Victory Column) in the Tiergarten area, and the Fernsehturm on the Alexanderplatz, the latter of which is a television tower and the tallest structure in the city, boasting a revolving restaurant.

Berlin Tourismus Marketing operates three official tourist information centres in the city, with multi-lingual staff on hand to answer your questions and dispense advice. These are located at the Brandenburg Gate, on the Budapester Strasse, and on Alexanderplatz.

With so much to see and do, the city has become a popular destination for visitors and there is a good selection of hotels, which range in price depending mainly on the area in which the accommodation in Berlin is situated. Luxury hotels are widespread throughout the city, although there are plenty of hotels offering good budget accommodation for those who wish to seek out a bargain for their stay. Between May and September, hotels become very busy and reservations are soon necessary. Berlin apartments are also available, suiting those who prefer to self-cater and enjoy a little more freedom. Popular districts with appealing accommodation include Charlottenburg, Friedrichshain, Kreuzberg, Mitte, Prenzlauer Berg and Wilmersdorf.

When the Berlin Wall was destroyed is 1989 this was an enormous turning point for the city, which has previously been divided for over 28 years. East and West are now thoroughly unified, although there are still some signs of division in these areas. There are countless landmarks throughout the city and popular sights include the Berliner Dom - a huge domed cathedral standing within the Mitte borough; the Brandenburg Gate - the former city gate and now an iconic symbol of Germany; the Potsdamer Platz - one of the busiest squares in Europe, full of shops, bars, cafés and places of entertainment, Checkpoint Charlie - probably the most famous part of the old Berlin Wall; and the imposing Reichstag, home to the German parliament and just as impressive today as when it was completed in 1884.

The city is full of historical information, with museums, such as Museum Island - a complex of five museums containing many important collections, and the Egyptian Museum, with 6,000 year old artifacts. There are also numerous art galleries in Berlin, where tourists can view sculptures and both old and modern paintings by world-famous artists, such as Van Gogh, Cézanne and Picasso. More information about Berlin Tourist Attractions.

The Tiergarten is the central park and this green oasis covers a vast area of more than 630 acres / 252 hectares. This is a beautiful park and it is a popular place where Berliners come to recharge, away from city life. With established gardens, trees, flowers, café and beer garden, there is even a secluded area set aside for nudists, who often come here to sunbathe in the peace and quiet.

Berlin is a relaxed city with an exciting atmosphere and a strong feeling of change. Tourism is fast becoming big business, indicating that despite the troubled past of Germany's capital city, this cutting-edge city has a great future that lies ahead.