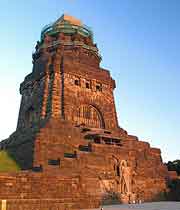 Leipzig is believed to have Slavic origins in history. One of the earliest settlements here was originally known as Lipsk. It grew up at the meeting point of the River Elster and the River Parthe.

The first written documentation of a settlement on the site dates to 1015, when 'Urbs Libzi' appeared in the 'Chronicles' written by a bishop named Thietmar von Merseberg.

From Medieval Times to the Reformation

In the second half of the 12th century, probably sometime around the 1160s, the settlement was granted a charter and the right to hold a market by Margrave Otto the Rich. Leipzig subsequently developed into a thriving commercial centre, largely because of its strategic location at the crossroads of main trading routes.


The city's rise as a cultural centre began in earnest in the 15th century. In 1409, the University of Leipzig was founded. Then, around 1481, a printer from Delitzsch called Marcus Brandis printed the first book here. A nascent printing industry grew up and, some 16 years later, Emperor Maximilian I granted the city the right to hold an imperial trade fair, establishing a long-held tradition in the city.

The German Reformation came to Leipzig in 1519, when Pleissenburg Castle became the venue for a meeting between Martin Luther and Johann Eck, a theologian and defender of Catholicism. Twenty years later, the city accepted the new Lutheran religion. That same year, Luther preached at the city's St. Thomas' Church.

History in the 17th and 18th Centuries

In the 17th and 18th centuries, Leipzig became a leading cultural centre in Europe. This was the age of Gottfried Wilhelm Leibniz, a well-known philosopher and mathematician who was born in the city in 1646. Leipzig also attracted many writers, including Johann Wolfgang von Goethe, who studied in the city in 1765.

The city's musical reputation was well established at this time. Johann Sebastian Bach was born and worked here as a choirmaster. The composer Schumann worked in Leipzig, while Richard Wagner was born here in the city in 1813. Felix Mendelssohn was instrumental in establishing the Gewandhaus concerts. He went on to set up the Leipzig Conservatory in 1842.

In October 1813, the Battle of Leipzig saw the Austrian, Russian and Prussian forces inflict a decisive defeat on the French Emperor Napoleon's army. The battle witnessed heavy losses on both sides.

From the early 19th century, Leipzig rose to become the very centre of the book and music publishing industry in Germany. In 1826, the Brockhaus publishing company began industrial-scale book production in the city. A few years later, Anton Philipp Reclam was to found both a lending library and publishing house here.

The dawn of the 20th century brought considerable change to the city. From 1902, work began on the Leipzig Central Station and an airport was opened soon after. Such developments were to come to an abrupt halt with the outbreak of World War Two. In December 1943, the city suffered the most severe air raids of the war. In April 1945, US forces captured the city, and a few months later, they handed control to the Soviet Union.

Post-war Leipzig came under Communist control. There were demonstrations against the East German government in 1953. However, it wasn't until October 1989 that the city again witnessed anti-Communist feeling on such a revolutionary scale. Leipzig was one of the cities that witnessed large demonstrations against the East German government at that time. They were to play an instrumental role in the eventual fall of the Communist system and the subsequent reunification of Germany.