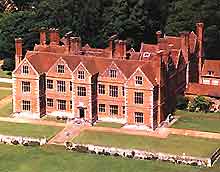 The coastal town of Poole is known for its sizeable natural harbour and rich maritime past, and many of the towns most noteworthy historic buildings and landmarks relate to its nautical heritage in some way. The Quay itself once played an integral part in the region's maritime trade and remains one of the oldest areas in town, along with the historic Old Town.

Poole Quay saw its bustling shipping business disappear almost overnight in the 1970s, when harbour activities were transferred to nearby Hamworthy. The quayside was quickly redeveloped and now functions as something of an attraction for tourists, being lined with shops, pubs, cafes and trendy waterfront apartments, often housed within former warehouses. Close by, the traffic-free High Street links the Old Town with the modern Dolphin Shopping Centre.

Sightseers looking for landmarks along Poole Quay should check out Customs House, which was constructed in 1814 and is now a Grade-II listed building, housing a popular restaurant business. Just a short walk away, the medieval warehouse known as the Town Cellars now contains a notable history centre for the town and dates back to the 15th century.


Within reach of Poole are the following landmarks, which you may consider to be worthy of a day trip or two: