Isle of Wight Landmarks and Monuments 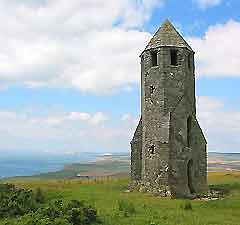 Being an island, the many landmarks of the Isle of Wight are rather spread around and will certainly be easier to reach if you have your own set of wheels. Your first port of call will likely be the magnificent Osborne House, which was built for Queen Victoria as a country retreat and family residence between 1845 and 1848, away from the pressures of Royal city life.

The Needles at Alum Bay provide another extremely famous sight, with these naturally eroded chalk stacks regularly appearing on postcards and promotional material for the Isle of Wight. Other significant island landmarks include Appuldurcombe House, the Bembridge Windmill, Carisbrooke Castle, Nunwell House and Yarmouth Castle. Built around 280 AD, the Newport Roman Villa is of great historical importance on the island and was actually discovered when a nearby house-owner began digging for the foundations of his new garage. This ancient villa has been faithfully reconstructed and now draws around 5,000 visitors each year.

Address: Coach Lane, Brading, Isle of Wight, England
Tel: +44 (0)1983 407240
Nunwell House is situated on the outskirts of Brading, close to Kelly's Copse. This traditional Jacobean and Georgian building dates back to the 12th century and is now a Grade-II listed structure. The house features a large collection of period furniture, paintings and pleasant gardens, as well as distant views of the Brading harbourfront and St. Helen's Road.
Open hours: July to September, Monday, Tuesday and Wednesday - 13:00 to 17:00, house tours - 14:00 and 15:30
Admission: charge 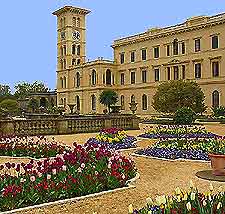 Address: East Cowes, Isle of Wight, England
Tel: +44 (0)1983 200022
Now managed by English Heritage, Osborne House is one of the most remarkable buildings on the Isle of Wight. This is a fascinating house steeped in history, providing tourists with a real insight into the Victorian era and Royal family life at that time. Osborne House was actually designed by Queen Victoria's beloved husband Prince Albert and after her death in 1901, the Royal family chose to donate the entire estate to the nation. The interior is both opulent and extravagant, while the spectacular gardens come with a number of grand statues, terraces, fountains and topiary.
Open hours: daily, April to October - 10:00 to 17:00 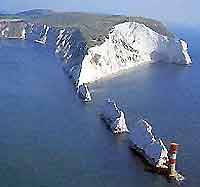 Address: near Alum Bay, Isle of Wight, England
The Needles remain one of the island's most spectacular and famous natural landmarks, consisting of three huge towers of chalky rock jutting out from the sea. The much-photographed Needles stand alongside Alum Bay, on the western side of the island. A fourth rock tower collapsed in 1764, while the third rock serves as a base for an automatic red and white lighthouse.

Address: Yarmouth, Isle of Wight, England
Tel: +44 (0)1983 760678
Yarmouth Castle is situated in Yarmouth, on the island's western coastline, where it was built in the middle of the 16th century to guard the harbour. This small fort is now owned by English Heritage and is a great place for seafront picnics. An onsite exhibition tells the story of these treacherous waters, where many ships have been wrecked over the years.
Open hours: April to October, daily - 10:00 to 17:00
Admission: charge, discounts available for children, free to members of the English Heritage

Address: Appuldurcombe Road, West of Wroxall, Isle of Wight, England
Tel: +44 (0)1983 852484
Dating back to 1702 and located near the village of Wroxall, Appuldurcombe House is an important building and an English Heritage property, being known for its resident owl and falconry centre. The birds of prey live within the old laundry and brewhouse, with regular flying displays captivating visitors. Of interest, the house is said to be haunted and many ghostly sightings have been recorded, including a phantom carriage appearing right outside the entrance to the house. The neighbouring Appuldurcombe Camping and Caravan Park is a useful point of reference.
Open hours: March, November and December, Saturday and Sunday - 10:00 to 16:00, April to September, daily - 10:00 to 18:00, October, daily - 10:00 to 16:00 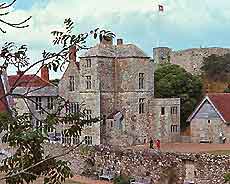 Address: Carisbrooke, Isle of Wight, England
Tel: +44 (0)1983 522107
Carisbrooke Castle is one of the major landmarks still standing on the island today and is to be found within the village of Carisbrooke, close to Newport. This historic castle has origins in the 12th century and remained in use right up until 1944, being once called home by none-other than King Charles I, when he was famously imprisoned here. Visitors will find a number of impressive apartments, a museum, an enclosure for children to safely explore and many scenic picnic areas. The recently opened Edwardian-style Princess Beatrice Garden is a particular highlight.
Open hours: daily, April to September - 10:00 to 18:00, October - 10:00 to 17:00, November to March - 10:00 to 16:00
Admission: charge, free to members of the English Heritage

Address: Cypress Road, Newport, Isle of Wight, England
Tel: +44 (0)1983 529720
Roughly 1,700 years old and now ranking as a Scheduled Ancient Monument, the Roman Villa at Newport was discovered in 1926 and consists of a corridor leading to eight rooms, three of which have well-preserved mosaics. Other interesting onsite attractions include an ancient bath and heating system, and also a varied collection of domestic Roman artefacts.
Open hours: April to October - 10:00 to 17:00

Address: West High Down, Needles Headland, Alum Bay, Isle of Wight, England
Tel: +44 (0)1983 754772
Owned by the National Trust, the Needles Old Battery is situated in the Needles Headland, on the western side of the island. This restored Victorian fort was built in the 1860s and has become a popular tourist draw. The fort features a 60-metre / 197-foot tunnel, much militaria, spectacular sea views and a tea room.
Open hours: mid-March to October, daily - 10:30 to 17:00 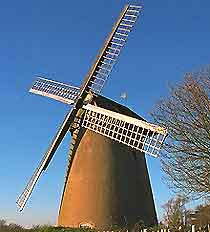 Address: Bembridge, Isle of Wight, England
Tel: +44 (0)1983 873945
Bembridge is one of the most trendy regions of the Isle of Wight, with a large yachting and residential area. Just outside of the village stands the island's last remaining windmill, which dates from 1700 and provides spectacular views of the surrounding countryside. Now owned by the National Trust, the Bembridge Windmill boasts a complete set of wooden machinery and gearing, most of which is original and well-preserved.
Open hours: March to October, Sunday to Friday - 10:00 to 17:00, also Saturdays between July and August

Other landmarks and monuments nearby Isle of Wight include:


Visit World Guides to Bournemouth for further information about Bournemouth Landmarks and Monuments.

Visit World Guides to Poole for further information about Poole Landmarks and Monuments.

Visit World Guides to Salisbury for further information about Salisbury Landmarks and Monuments.