Shaped by the hand of world-renowned engineers and architects, the city of Bristol contains some very impressive and intriguing sights. Amongst the most loved and eye-catching landmarks is the hugely distinctive Clifton Suspension Bridge, which spans the Avon Gorge and connects the city's Clifton area with Leigh Woods, being designed and partly built by acclaimed Victorian civil engineer of the time, Isambard Kingdom Brunel.

One of the most visited of all the attractions in Bristol and a very different kind of landmark, the SS Great Britain is another Brunel classic and comes with a Maritime Heritage Centre, which caters for visitors of all ages. Young children will be occupied by a range of 'Discover and Learn' activities around the ship, including dressing-up and professional storytelling sessions. The SS Great Britain resides within the Great Western Dockyard, where it was originally built many years ago.

History is also very much present at the Red Lodge, King John's Hunting Lodge, around Queen Square and at the archaeological site of the King's Weston Roman Villa, where Roman ruins suggest a fascinating past.

Address: Clifton, Bristol, BS8 4AP, England
Tel: +44 (0)117 974 4664
The Clifton Suspension Bridge is perhaps the ultimate sight in Bristol, regularly appearing on city postcards and promotional literature. Designed by Isambard Kingdom Brunel (1805 to 1859), the bridge was completed shortly after his death, being built between the years of 1831 and 1864, following various unforeseen delays. Pedestrians can walk along the bridge enjoying the views, while thousands of cars now regularly ply this route each day. If you would like to learn more about the history of the bridge, then the archives and models at the Sion Place visitor centre may well be of interest.
Open hours: daily - 24 hours daily
Visitor Centre: April to October, daily - 10:00 to 17:00; November to March, Monday to Friday - 11:00 to 16:00, Saturday and Sunday - 11:00 to 17:00
Admission: charge, discounts available for seniors, children and families (Visitor Centre) 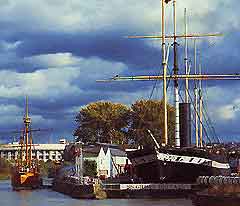 Address: Gas Ferry Road, Great Western Dock, Bristol, BS1 6TY, England
Tel: +44 (0)117 929 1843
The story of the SS Great Britain is quite a remarkable one. Designed by Isambard Kingdom Brunel and built by renowned engineer William Patterson, construction of this passenger steamship commenced in 1839, with the iron giant being officially launched in 1843 by Prince Albert (beloved husband of Queen Victoria) and finished in its entirety some two years later. The ship immediately became a record breaker, being the biggest ship in the world, and also the fastest and most innovative. The speed of 12 knots was attainable due to the combination of both an iron hull and a sizeable steam-powered screw propellor - a first for shipbuilding at that time. Over the years, the ship has been both a luxury ocean liner and a cargo vessel, and famously transported the English cricket team all the way to Australia in 1861.

The life of the SS Great Britain ended in 1886 when it was badly damaged during a journey to San Francisco, with the ship ending up at Sparrow Cove in the Falkland Islands after being sold as a vessel for storing wool and coal. In 1969, an ambitious project to rescue this great steamship and return it to Bristol was instigated. Although a large crack down the centre of the hull caused many problems, the ship was successfully transported on an enormous floating pontoon some 8,000 miles / 12,875 km across unpredictable Atlantic seas. Today, the ship has been fully restored and the breathtaking shape of the bow can be fully appreciated, beneath the rather unusual 'glass sea'. Nearby, you may also like to visit the replica of the 15th-century wooden sailing ship named the Matthew, the Maritime Heritage Centre and the Dockyard Café Bar.
Open hours: daily, April to October - 10:00 to 17:30; November to March - 10:00 to 16:30
Admission: charge, discounts available for seniors, children and families

Address: Queen Square, off Prince Street, Bristol, BS1, England
Located in Bristol city centre and next to the quayside, Queen Square was originally laid out in the early 18th century, when Queen Anne was on the throne, and became the largest square of its kind in the whole of Europe. This spacious plaza has always been an integral part of historic city life. Indeed, Queen Square is a popular place for walking and relaxing on the areas of grass, and has a number of benches which are ideal for picnics.

Address: Long Cross, Lawrence Weston, Bristol, BS11 0LP, England
Tel: +44 (0)117 922 3571
Located just under 7 miles / 11 km to the north-west of the city centre are the ancient remains known as the King's Weston Roman Villa. Excavated in the late 1940s, shortly after their accidental discovery by builders working on the nearby housing estate, the villa dates back more than 1,600 years and comprises the remains of the original walls, together with some impressive mosaics, which are now protected by a wooden hut. Although the site only opens periodically, the ruins can be clearly seen through the surrounding fence, and a key can be obtained (a small deposit is payable) from the Blaise Castle House Museum if you are particularly keen to explore.

Address: Doleberrow, Winscombe, BS25 5PP, England
Tel: +44 (0)117 926 8018
Dolebury Warren is situated some 15 miles / 24 km to the south-west of Bristol city centre and is full of interesting historic features. Designated as a 'Scheduled Ancient Monument and Landmark', notable sights include Dolebury Fort, which is a fine example of an ancient Iron Age hill fort. There is also a nearby Celtic field network of underground pathways dating back around 2,000 years. The area is particularly rich in wildlife and functions as a nature reserve.

Address: The Square, Axbridge, Bristol, BS26 2AP, England
Tel: +44 (0)1934 732 012
King John's Hunting Lodge is situated close to the city centre and is an early Tudor merchant's house with no actual connection to King John - or even hunting. Now owned by the National Trust, this important building was restored in 1971 and attractions include a local history museum run by the Axbridge and District Museum Trust, and an example of wooden stocks, which were used as a method of punishment many years ago. The Hunting Lodge also has regular exhibitions, activities and events throughout the year. This half-timbered building reflects the wealth of the town during the 14th century, when Somerset produced a large amount of wool.
Open hours: April to September, daily - 14:00 to 17:00
Admission: free, donations suggested

Address: Green Lane, Severn Beach, Bristol, BS35 4HW, England
Tel: +44 (0)1454 633 511
This popular Visitor Centre is situated in the Avonmouth area of Bristol, on the Severn Way Coastal Footpath, where it celebrates the two impressive Severn bridges, both of which connect Wales and serve as important landmarks in this area. The first Severn Bridge was built in 1966 and remains as one of the longest suspension bridges in the world. The Second Severn crossing was completed in 1996, when it became the longest bridge in the United Kingdom. Onsite attractions include an education centre, historic displays, interactive exhibits, walking trails, scenic views and a gift shop, selling postcards and related goodies.
Open hours: April to June, Wednesday to Sunday - 11:00 to 16:00, July to September, Tuesday to Sunday - 11:00 to 16:00, October to December, Saturday and Sunday - 11:00 to 16:00

Other monuments and landmarks nearby Bristol include: