A holiday in Poole is likely to consist of a series of days out, with the town being conveniently close to numerous coastal attractions and cultural offerings. The seaside town of Bournemouth is situated just 8 km / 5 miles to the east of Poole and is known for its glorious sandy beaches, historic pier and Victorian Pleasure Gardens.

Right next-door to Bournemouth and slightly further from Poole are the beaches of Boscombe, Southbourne, Hengistbury Head and Mudeford, the latter of which offers a lively seafood market, individual beach huts, crabbing and various fishing-related attractions. Christchurch is also in this direction and this town is brimming with history, drawing some 1.5 million visitors annually and being little more than a stone's throw from the New Forest. Salisbury, Stonehenge, Breamore House and even Longleat are all within driving distance, although an early start will mean that you make the most of your time for these particular excursions. 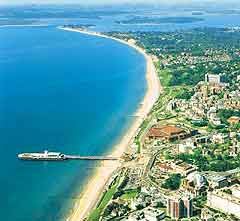 If you are on holiday in Poole, then a day trip or two to Bournemouth is an absolute must. The town centre is easy to navigate on foot, with its Lower Pleasure Gardens leading to shops, cafes, theatres, crazy golf and a large children's playground.

Standing right next to the pier, the Oceanarium features plenty of aquarium-related attractions and marine life, including an underwater tunnel through the shark tank. Both the Pavilion Theatre and the Bournemouth International Centre provide various shows, musicals, comedy gigs and other performances all through the year. Clifftop hotels with sea views are at a premium, although there are plenty of cheap B&Bs spread around the town, often being only a short walk from the action. For an injection of culture, the Russell-Cotes Art Gallery and Museum will more than provide. 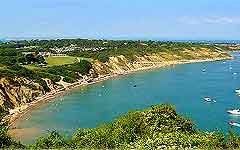 The Isle of Wight is understandably at its busiest during the summer holiday season, although visitors do come here all through the year. Situated a mere 3.5 km / 2 miles from the Hampshire coastline, just under 400 ferry and hovercraft crossings connect the island most days, with the quickest taking less than ten minutes and departing from Southsea, in Portsmouth.

The Isle of Wight lies some 67 km / 42 miles from Poole and is just about close enough to make day trips possible. However, a weekend break or longer will allow you to properly explore the beaches and plentiful attractions on offer, such as the Needles Pleasure Park next to Alum Bay, and Osborne House, which was once a holiday retreat for none-other than Queen Victoria. Notable towns on the island include Cowes - famous for its sailing regattas, Fishbourne, Freshwater, Newport - the capital, Ryde, Sandown, Shanklin, Ventnor and Yarmouth. 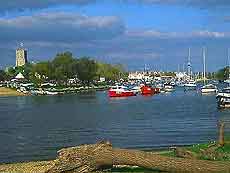 Christchurch is a small and rather affluent town located 16 km / 10 miles from central Poole. The Christchurch Priory is the big draw here and this huge former priory church has its origins in the mid-11th century. There are plenty of interesting and often quirky shops scattered around the town centre, while close by, Avon Beach at Highcliffe is worth searching out. Further nearby beaches are based around Highcliffe Castle, Barton on Sea, Milford on Sea and Lymington, the latter of which lies next to the New Forest.

Just 11 km / 7 miles from Poole, Boscombe is a bustling seaside town and has a lengthy beachfront, complete with a revamped pier and a long promenade, which leads all the way into Bournemouth. Boscombe features an excellent shopping precinct and many popular restaurants. Next door is the slightly more upmarket suburb of Southbourne, which leads onto Hengistbury Head, where a land train connects the shanty beach of Mudeford and its brightly coloured huts.

The small town of Wimborne is famous for its old minster and is just 11 km / 7 miles from Poole. Wimborne Minster dates back some 1,300 years and over the centuries has functioned as both a Benedictine nunnery and a monastery. The Minster is home to a number of fascinating attractions, including the tomb of King Ethelred. Well worth checking out is the model town of Wimborne, showing its layout as it appeared in the mid-20th century. 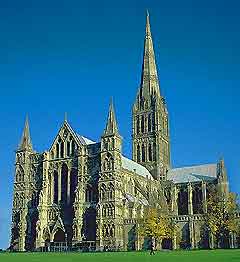 Wiltshire's only city, Salisbury is called home by a number of England's most famous and important attractions. Within the city itself, Salisbury Cathedral towers high above the surrounding buildings and its tall spire can be seen for literally miles. Just a short distance away and presiding over Salisbury Plain is Stonehenge, which draws many thousands of visitors each day and stands just off the A303. Also nearby is the Iron Age hill fort named Old Sarum Castle, as well as Old Wardour Castle, which is known for its part in the Parliamentarian battle of 1643.

Address: near Fordingbridge, Hampshire, SP6 2DF, England
Tel: +44 (0)1275 512468
The rather grand Breamore Manor House is situated in the scenic village of Breamore, 33 km / 21 miles from central Poole. Overlooking the Avon Valley, this historic Elizabethan house was completed in 1583. Over the years, the house has seen many alterations and extensions, particularly following severe fire damage in 1856. Today Breamore House features a museum with an extensive collection of steam powered farm machinery, many exceptional works of art and antiquities, and a popular medieval turf maze.
Open hours: daily - 14:00 to 17:30
Admission: charge, discounts available for children and families 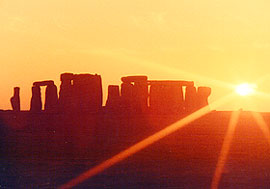 Address: Salisbury, Wiltshire, SP4 7DE
Tel: +44 (0)1980 624715
One of the most famous and most visited heritage attractions in the world, the gigantic stone monoliths that make up the circle of Stonehenge are believed to have been positioned here approximately 4,500 years ago, being possibly erected as a monument to the sun. As a result of its situation, Stonehenge draws thousands at the Summer Solstice, including more than a handful of druids. Photographers often hang around until the sun sets, looking for that elusive shot, although it can be especially hard to photograph the stones, since people and fences are invariably in the way of most planned shots. Stonehenge is situated 3 km / 2 miles west of Amesbury, on the junction of the A303 and A344 / 360, and is 66 km / 41 miles from central Poole. Visitors should look around the surrounding landscape, since the remnants of numerous burial mounds are often easy to spot.
Mid-March to May - 09:30 to 18:00 / June to August - 09:00 to 19:00
September to mid-October - 09:30 to 18:00 / end of October - 09:30 to 17:00
November to mid-March - 09:30 to 16:00
Admission: charge

Address: Warminster, Wiltshire BA12 7NW
Tel: +44 (0)1985 844400
Longleat is famous for its safari park and resides some 69 km / 43 miles from central Poole, being situated close to Warminster and just past Crockerton. Arrive early and you will avoid the initial crowds and traffic queues for the safari park, where you can drive through African paddocks, lion enclosures and the monkey jungle, although this particular attraction can be avoided if you are worried about the monkeys damaging your car. Next stop will likely be a tour of Longleat House, or a boat trip around Half Mile Lake, where sea lions and hippos live. Close to the house is the longest hedge maze on the planet, animal corners, a railway ride past the lake, roller coaster simulators, a mirror maze and an Adventure Castle, where children will happily spend much of the day. The summer weekends are known for being extremely busy, when the sun is shining, and so are best avoided unless you are prepared for lengthy queues.
Open hours: daily, April to early November
Admission: charge, discounts available for children

Other popular tourist attractions close in Poole include: