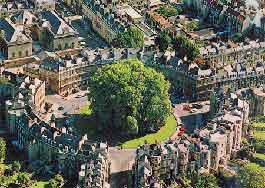 There is no question that Bath is a grand city and this World Heritage Site welcomes a steady stream of visitors all through the year, with countless tourists coming here to marvel at the impressive Georgian architecture and old landmarks.

Many of the houses in the city are extremely grand in their appearance, such as those making up the Royal Crescent and the Circus, although interestingly, when viewed from behind, the glamour of these buildings often rather disappears into a jumble of strange extensions and untidy facades. This is particularly the case for the grand landmark building fronting the northern side of Queen Square and now partly housing the Bath Academy, which was built to resemble a palace when seen from the front, with little thought given to the hidden rear elevation.

No trip to Bath would really be considered complete without taking a tour of the ancient Roman Baths, which were constructed in the middle of the 1st century AD and expanded over the following three centuries. Afterwards, you may like to pay a visit to the market at the Guildhall, before shopping on the three-arched Pulteney Bridge - look out for the box-shaped shop extensions hanging out over the river when viewed from the Podium shopping centre.

Address: North of Queen Square, Bath, North-East Somerset, BA1 1EE, England
Tel: +44 (0)1225 477101
The Circus ranks amongst the most recognizable landmarks in the city and is particularly striking when viewed from above, on one of the many hot air balloons that often rise above this area from nearby Victoria Park. This perfect circle of 33 Palladian-style houses was designed by John Wood and building began in 1754 - the year that John Wood died, just before his dream took shape. The inspiration for this circular structure came from Rome's Colosseum and parts of it do bear a striking resemblance to a Roman amphitheatre, with three tiers and Corinthian columns. Of interest, famous Hollywood actor Nicholas Cage owned a house on the Circus between 2007 and 2009 (purchased for around £4 million), when he could occasionally be spotted shopping in the city. 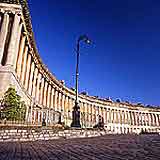 Address: Royal Crescent, Bath, BA1 2LR, England
The construction of the stunning Royal Crescent began in 1767 and was completed by 1774. Designed by the son of John Wood who planned the nearby Circus, this is one of the city's most prominent and loved local sights, often appearing on postcards. Situated next to Victoria Park, the Royal Crescent consists of 30 glorious houses, decorated with a facade of columns and built of pale-gold Bath stone.

The semi-elliptical sweep of more than 100 metres / 500 feet, combined with the sheer grandeur and scale of the buildings, will take your breath away. In front of this important landmark lies a long slope of green lawns, with a number of ancient trees nearby. 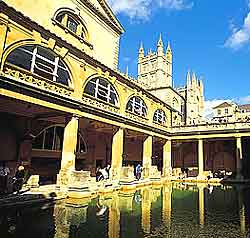 Address: Abbey Churchyard, Bath, North East Somerset, BA1 1LZ, England
Tel: +44 (0)1225 477785
The Roman Baths are situated in the heart of the city and remain one of the finest religious spas in the ancient world. They were originally built when the Romans arrived in Britain almost 2,000 years ago and are cherished by locals, being surprisingly well preserved. The Roman's constructed an elaborate bathing and drainage system, along with a sauna and several deep, cold plunge pools. Fed by the only natural hot spring in Britain, the Roman Baths are among the top tourist attractions in the city and are a truly unique, historical site.

Visitors will be able to appreciate some ancient architecture, with guided tours and audio guides providing an overview of the history and past events. There is a museum onsite, with many interesting artefacts, stone sculptures and statues, as well as a large gift shop. Of interest, computer visuals reconstruct how the Roman Baths may have looked when they first opened.
Open hours: November to February - 09:30 to 17:30, March to June and September to October - 09:00 to 18:00, June to July - 09:00 to 22:00
Admission: charge, discounts available for children, children six years old and under are free

Address: Pulteney Bridge, Bath, North-East Somerset, BA1 1EE, England
Tel: +44 (0)1225 477101
Spanning the River Avon and located alongside a rather dramatic U-shaped staircase weir, Pulteney Bridge is of great significance in England, being one of the few bridges on the planet to be lined with buildings and shops on both sides. In fact, when you walk across the bridge, it feels more like you are simply strolling down a grand shopping street than crossing a wide river. Now a Grade-I listed building, construction commenced in 1769 and was relatively swift, being completed in 1773. The structure was named after wealthy landowner Sir William Pulteney, who commissioned the project with his wife Frances, so that their Bathwick estate would be better connected to the city. Close by, Great Pulteney Street also bears the family name, while Henrietta Street is actually named after Sir William's daughter.

Address: High Street, Bath, North-East Somerset, BA1 5AQ, England
Tel: +44 (0)1225 477101
The stylish Guildhall and Banqueting Room was designed in 1776 by Thomas Baldwin and is situated in the heart of the city centre, close to Bath Abbey. This imposing building has many interesting exhibits, including a collection of portrait paintings, the grand Banqueting Room - which has three enormous chandeliers dating back to 1778, detailed architecture and neoclassical decoration. The splendid Banqueting Room is regularly used as a venue for important dinners, meetings, presentations and dances. Underneath the main Guildhall building is a large and busy indoor market, which is open daily and attracts many shoppers.

Other monuments and landmarks nearby Bath include: