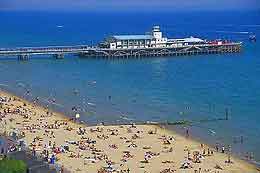 The Victorian grandeur of Bournemouth is easy to imagine and a stroll along the pier will reveal many display boards with interesting black and white photographs, clearly showing exactly how the town's seafront landmarks appeared more than 100 years ago.

The very first Bournemouth pier was a simple, short wooden jetty that was constructed in 1856. Due to the popularity of the pier, this jetty was soon replaced by a longer wooden pier in 1861, and shortly afterwards, cast iron was used instead of the wooden piles. Soon after, part of the landing stage was swept away and the pier was closed while repairs took place, and the new and improved version reopened in 1880, at a cost of almost GBP 22,000. 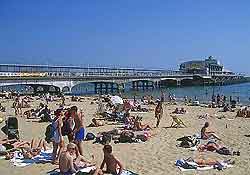 In 1909, Bournemouth Pier was extended to 305 metres / 100 feet in length and in 1940, much was demolished as a precaution against German invasion during the Second World War. The pier was soon repaired and strengthened, to allow the addition of the popular Pier Theatre, which now stands towards the end. In 1979, a redevelopment programme, costing over GBP 1.7 million, saw much reconstruction work and the famous octagonal leisure complex was added.

The Bournemouth Pier remains one of the most important and historic landmarks along this coastline and the town has grown up around this traditional seaside structure, which remains at the heart of local tourism. These days, attractions here include one of the best indoor amusement arcades in the area, featuring many modern video games and seaside slot-machine amusements, as well as sheltered seating areas on the pier itself, and a theatre which shows regular comedies and traditional farces throughout the summer season. Many people simply like to stroll up and down, or enjoy some fish and chips purchased from nearby Harry Ramsdens, while families will likely head to the small funfair situated at the end during the holiday season, complete with helter skelter. Keen surfers can often be observed battling the waves alongside the pier.
Admission: seasonal charges usually apply

Other interesting landmarks within reach of Bournemouth include: