Getting Around, Poole Travel, Transport and Car Rental 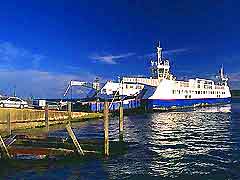 Poole is situated in the centre of the south coast of Britain and is well-served by public transport. This harbourside resort comes with a large bus station, a major train station with excellent connections throughout England and also a busy port, where ferries (Brittany and Condor) travel to and from Cherbourg, Guernsey, Jersey and St. Malo.

Poole town centre is extremely walkable and throughout the summer months, it regularly fills up with tourists exploring the shops and enjoying a bite to eat at one of the harbourfront restaurants. If you have a car, then the whole of Dorset is at your fingertips, with endless day trips being possible.

Nearby Salisbury, in Wiltshire, is easily reached by simply following the A350, while those looking for a quick way to drive from central Poole to its suburb of Hamworthy can now use the recently constructed Twin Sails Bridge, opened in 2012 and built at the cost of almost £40 million.

Holiday makers without a car may like to make use of the local bus transport, which is operated by Wilts & Dorset, and connects the likes of Boscombe, Bournemouth, Christchurch and Swanage, as well as the New Forest and other neighbouring tourist destinations.

Poole is within driving distance of a number of airports, the closest and most convenient of which is Bournemouth International Airport (BOH), and also nearby Southampton Airport (SOU). London Airports, including Heathrow (LHR), Gatwick (LGW), Stansted (STN) and London City (LCY) are also within easy travelling distance of Bournemouth and Poole, by either train, coach or car.

The district of Poole is served by a number of major roads, dual-carriage ways and motorways. Although the traffic in and out of Poole can be heavy during peak commuting hours (07:30 to 10:00 and 16:00 to 18:00), driving in the centre is fairly easy. Many tourists either bring their own vehicle or hire a car, offering the chance for day trips to Bournemouth, Christchurch, Highcliffe and the New Forest (east), as well as Swanage (south), and Weymouth, Abbotsbury and Lyme Regis (west).

There are plenty of parking garages and off-street parking areas in the town, and parking is available at Branksome Beach, Broadstone, the Civic Centre, Commercial Road, the Dolphin Shopping Centre, the Hamworthy Recreation Ground, Jubilee Road, Lake Pier Hamworthy, Penn Hill, Poole Quay, Sandbanks, the Station Approach, the Whitecliff Recreation Ground and in the very town centre. Park and ride facilities are also located nearby, on the Riverside Bournemouth Spur Road, at Mannings Heath and on Magna Road.

Much of the area around Poole Quay is completely traffic-free, meaning that you can stroll between the cafes, restaurants and shops with ease. The High Street is completely pedestrianised between Old Orchard and BHS.

The continental ferry ports can be easily reached by the port of Poole and also nearby Southampton and Portsmouth. Brittany Ferries, Condor Ferries and P&O Ferries all have regular ships that sail from Poole to mainland Europe.

Tel: +44 (0)1202 673555
Buses in Poole are heavily used and provide a particularly inexpensive way to travel around the town, as well as connecting destinations along the famous Jurassic Coast. Operated by Wilts & Dorset (based here since the early 1980s), these buses and coaches link nearby Boscombe, Bournemouth, Christchurch and Wimborne. Bus passes are available for set periods and these can be particularly cost effective. Of note, the bus station is situated in the town centre, being next to the Dolphin Centre and close to the Train Station.

Coaches in Poole are operated by National Express and regularly travel to the London Victoria Coach Station and the terminals of Heathrow Airport, and also provide direct links to Bristol, Birmingham, Brighton, Eastbourne, the Midlands, Glasgow and Edinburgh.

Tel: +44 (0)8457 484950
Poole's train service provides good connections throughout England and there is a large train station situated in the centre. Operated by South West Trains, South Central Trains and Virgin Trains, regular trains travel to towns and cities including London Waterloo, which can be reached in just over one and a half hours, along with Basingstoke, Berkshire, Birmingham, Chichester, Dorchester, Edinburgh, Exeter, Hampshire, Manchester, Oxford, Poole, Somerset, Southampton, Surrey, Wareham, Weymouth, Wiltshire, Worthing, Winchester and York. Advance seat reservations can be booked if required and cycle racks are also available outside of Poole Train Station.

Taxis in Poole are one of the most convenient ways to travel around this part of Dorset and are usually reasonably priced. They can be easily caught from taxi ranks in the town centre, at the Travel Interchange, outside of the main railway station and at Bournemouth International Airport. Poole has many licenced taxis, including private vehicles, which are available 24 hours a day. In quieter areas, taxis can be ordered by telephone and there are a number of reputable firms that your hotel should be able to recommend.

Poole has several bicycle rental shops available, with many coastal trails enticing cyclists during the summer months. In total, there are more than 70 km / 43 miles of cycle routes around the town, including a popular stretch of the National Cycle Network Route 25.