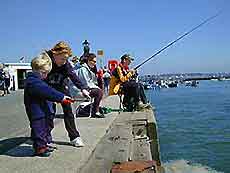 When it comes to recreational activities around Poole, it is the plentiful water sports that really steal the show. Locals can often be seen zooming around the coast on jet-skis, while windsurfing, sailing and yachting are also popular here - both the Parkstone Yacht Club and the Lilliput Sailing Club are of note, amongst others.

Around nearby Bournemouth and Boscombe, keen surfers can often be spotted riding the waves next to the piers. There is even seasonal water-skiing and paragliding at times. If you prefer something rather more gentle in the water, then you can always hire a pedalo or kayak at Poole Park.

When it comes to evening entertainment in town, the Poole Stadium on Wimborne Road stands out, being known for its frequent greyhound racing. Speedway events are also staged at the stadium, courtesy of the Poole Pirates. Stockcar racing is another notable spectator sport in the vicinity of the town, being found at the nearby Ringwood Raceway, within the Matchams Leisure Park on Hurn Road. Matchams is to be found roughly 13 miles / 21 km to the north-east (some 25 minutes).

The Poole Town Football Club (FC) was founded in 1890 following the merger of both the 'Hornets' and the 'Rovers'. Over the years, the club has enjoyed much success, reaching the prestigious FA Cup no less than four times. The team called Poole Stadium their home ground between the years of 1933 and 1994, and now play at Tatnam Farm, based on Tatnam Road and just off Wimborne Road - this playing field is currently shared with the neighbouring Oakdale South Road Middle School. Tatnam Farm can accommodate up to 2,000 spectators during the biggest games. 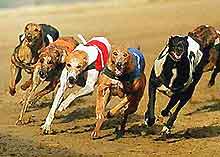 Address: Stadium Way / Wimborne Road, Poole, Dorset, BH15 2BP, England
Tel: +44 (0)1202 677449
Greyhound racing is one of the most popular spectator sports in the town, being staged throughout the year at the Poole Stadium. The stadium itself dates back to the early part of the 1930s, although greyhound racing did not actually arrive here until 1960. A new grandstand with large glass windows was erected in the 1990s, complete with a sizeable restaurant, two licensed bars, viewing screens and betting facilities, while bookmakers are based outside. Of note, the stadium is often also referred to as the Wave 105 Stadium, following sponsorship by a local radio station. Races are held here several times a week, on Friday and Saturday evenings, as well as Tuesday evenings.
Open hours: Tuesday, Friday and Saturday - 19:30 onwards

Address: Stadium Way / Wimborne Road, Poole, Dorset, BH15 2BP, England
Tel: +44 (0)1202 681145
Located close to the waterfront and Holes Bay Road, the Poole Stadium is home to many top Speedway motorcycling racing competitions, including the Elite League, the Knock Out Cup and the Speedway World Cup. The town's very own racing team are the popular Poole Pirates, who have raced here since 1948.
Open hours: Wednesday - 19:30 onwards 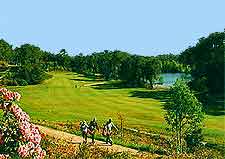 Poole has a number of golf courses in and around the town, as follows: