When it comes to English landmarks, few are grander than Salisbury Cathedral, with its towering spire being the UK's tallest. However, this is certainly not the only sight of historical significance in the vicinity of the city.

A visit to nearby Old Sarum Castle, roughly ten minutes to the north of central Salisbury, will reveal a lengthy history of some 5,000 years and this important Iron Age hill fortress offers walking trails, superb countryside views and a fun English Heritage gift shop, where youngsters may like to purchase toy bows and arrows. Another epic monument to the past is Old Wardour Castle, which is an English Heritage landmark with an especially interesting story to tell, including a couple of Civil War sieges for starters. At the Rockbourne Roman Villa, visitors will find some remarkable Roman ruins, including well-preserved mosaics and the remains of ancient underfloor heating.

Address: Castle Road, Salisbury, Wiltshire, SP1 3SD, England
Tel: +44 (0)1722 335398
Old Sarum Castle is one of Wiltshire's most important landmarks and is regularly visited by thousands of people each year. This enormous Iron Age hill fort of Old Salisbury (Old Sarum) was also used by the Romans, Saxons and Normans. Soon after, the castle became a medieval settlement and now contains the ancient ruins of a large fortress, cathedral and Bishop's Palace.

Other attractions include a series of interpretation panels, excellent views, picnic areas, a well-stocked gift shop, a café and a parking area for cars. There are also a number of exciting events often staged here and in the past these have included 'Family Fun Trails' during school holidays, and 'Life in the Iron Age and Beyond', where members of the English Heritage joined a local archaeologist for a real insight into the past.
Open hours: daily, April to June - 10:00 to 18:00, July and August - 09:00 to 18:00, September - 10:00 to 18:00, October - 10:00 to 17:00, November to March - 10:00 to 16:00
Admission: charge, discount available for seniors and children, English Heritage members are free 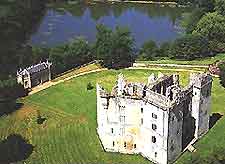 Address: English Heritage, near Tisbury, Salisbury, Wiltshire, SP3 6RR, England
Tel: +44 (0)1747 870487
Located approximately 35 minutes to the west of Salisbury and alongside the sizeable village of Tisbury, Old Wardour Castle is now in the hands of English Heritage, who have preserved the structure and opened it to members of the general public. The castle was built at the very end of the 14th century and famously came under attack by Parliamentarian forces in 1643, when much of the structure was destroyed following damaging explosions. Today, visitors are able to partake of self-guided audio tours around the ruins, enjoy a picnic within the grounds and explore some pleasant landscaped gardens, complete with grotto.
Open hours: April to September, daily - 10:00 to 18:00; October, daily - 10:00 to 17:00; November to March, Wednesday to Sunday - 10:00 to 16:00
Admission: charge, discount available for seniors and children, English Heritage members are free

Address: Rockbourne, Fordingbridge, SP6 3PG, England
The Rockbourne Roman Villa is located in the scenic countryside of Fordingbridge, close to Salisbury, where it was discovered as recently as the early 1940s, by a local farmer. The largest and most ancient villa is well preserved and is believed to have been occupied until the arrival of the 5th century. Nearby is a modern museum housing a number of interesting exhibits, including historic villa artefacts. There is also a museum shop, a café area and a car park.
Open hours: April to September, daily - 10:30 to 18:00
Admission: charge, discount available for children and families

Other landmarks and monuments nearby Salisbury include: