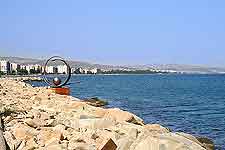 If you can make the effort to drag yourself away from the beautiful beaches of Paphos and explore the surrounding region of Cyprus, then you will be rewarded with some wonderful attractions. Close to Paphos, leading Cypriot attractions suitable for day trips include the Adonis Falls, the Akamas Heights, the Akamas Peninsula and also Coral Bay.

A jewel on the south coast of Cyprus, Limassol lies directly to the east of Paphos and is a somewhat underrated city. The attractions here are generally based in two main areas, the historical Old City district and the easterly tourist area referred to as Potamos Germasogeias. 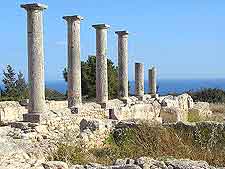 Limassol is an especially walkable city with the main highlights including the Limassol Medieval Castle, the Archaeological Museum, the Folk Art Museum, the Grand Mosque, and the Lemesos Mini Zoo and Reptile House. On the hottest of days, the Wet 'n' Wild water park is the ideal place to cool down and take time out, and is conveniently situated close to the beachfront.

Although the Adonis Falls is usually considered to be something of a tourist trap, the Adonis Falls does have its attractions and really is a very attractive spot. The waterfall itself is roughly 10 metres / 33 feet in height and cascades down into a small pool, known as the 'Baths of Adonis'. Located just upstream from the expansive Mavrokolymbos reservoir, the Adonis Falls can only be reached by using a long dirt track, meaning that a 4WD vehicle is necessary. 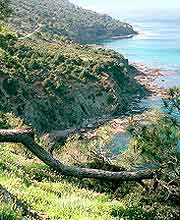 A sizeable part of western Cyprus, the Akamas Peninsula stands directly to the north of Paphos and close to Polis. This Mediterranean wilderness remains quite untouched by man and is a great place to come to experience plentiful native Cypriot flora and fauna, with more than 600 different species of plant known to grow here. In the past, the Akamas Peninsula was used as a firing range by the British army and today features walking / cycling trails (such as the Aphrodite, Adonis, Pissouromouttis and Smigies trails), while sightseers may also like to consider taking a boat trip here from Latsi, on the western side of Polis. You can also reach the Akamas Peninsula via the village of Agios Georgios. Prominent attractions include the Castle of Rigena, the village of Kefalovrysi, the Smigies picnic ground and the legendary Baths of Aphrodite.

Those holidaying in the Paphos region of Cyprus really should take time out to pay a visit to the Akamas Heights area. There are many villages spread around Akamas Heights, with plenty of traditional Cypriot houses, Cypriot taverns and scenic hiking trails. Other attractions here include some of the most magnificent beaches in southern Cyprus, such as Agios Georgios Beach and Lara Beach, which are often particularly peaceful and uncrowded. The main villages of Akamas Heights are Dhrousia, Kritou Terra, Kathikas, Pegeia, Pano Akourdalia and Kato Akourdalia. 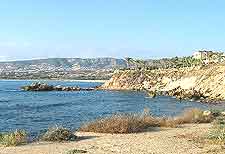 Locals often enjoy telling tourists how coral was once a familiar sight on this beachfront many years ago. Today, Coral Bay is quite different and boasts a well-developed infrastructure, attracting hordes of summer tourists. Coral Bay is perfect for families and lies some 12 km / 7 miles to the west of Pafos. Day trippers will find a number of different sandy stretches around Coral Bay, all of which can be accessed from the main approach road. Campers may like to consider pitching a tent at the Camping Feggari site, which is by far the region's best camping ground.

Perfect for outdoor activities and recreational attractions, Polis is close to Paphos and promotes itself as a great destination for hiking, cycling and mountain biking around the Akamas area. There are also several very popular beaches close by, fronting Chrysohou Bay (between the tip of the Akamas Peninsula and Pomos Point), as well as wine-making villages worth touring. Fortunately, the seaside village of Polis has managed to escape the overdevelopment experienced in some other Cypriot resorts and remains fairly traditional in its appearance.