Getting Around, Paphos Travel, Transport and Car Rental

In general, the resort of Paphos is easy to navigate by foot, although bus transport is on hand should you need to travel further afield. Local buses offer a good service in Paphos, while many holiday makers simply prefer to hire their own car, motorbike or scooter, so that they can travel at their own pace, and when they want.

Taxis provide a further transport option of Paphos and when the cost is shared with other passengers, can really be quite inexpensive. There are also a number of cruises available at the resort's colourful marina, travelling to an array of appealing destinations along the southerly coastline of Cyprus. 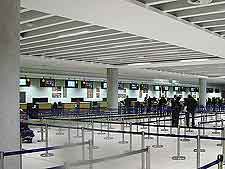 Address: Paphos, Acheleia, 8320, Cyprus
Tel: +357 2680 1800
Paphos International Airport stands just under 16 km / 10 miles from the resort of Paphos and to the east. Both scheduled and charter planes use this airport, with around 20 airlines servicing the facility and including big names such as British Airways, Cyprus Airways, easyJet, Eurocypria Airlines, Flyglobespan, Thomas Cook Airlines and Thomson Airways. Although there is no actual bus transport available at the airport, taxis and shared-taxis (dolmus) are on hand and are quite affordable. Travellers and holiday makers should bear in mind that Paphos Airport is relatively small and in demand, and so can get extremely busy at times, servicing almost two million passengers each year. It is not unusual for several flights to arrive and depart at roughly the same time. 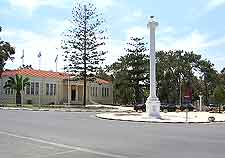 Holiday makers favouring self-drive and car rental were rewarded in 2001, when a motorway link to Paphos opened, connecting the resort with Limassol and beyond. Understandably, renting a car in Paphos, or at the airport, is a very popular way to travel around, suiting those looking for more independence than bus transport can provide. Car hire in Cyprus is generally competitively priced, particularly the local Cypriot rental companies, although some tourists prefer to save a little money on hire and fuel costs, by renting a motorcycle or scooter instead (helmets must always be worn). Drivers from the UK will find the Cyprus roads easy to use, since driving is also on the left-hand side of the road. Bear in mind that due to high humidity levels in the summer months, air conditioning in rental cars is always worth requesting.

Tel: +357 2693 6822 (Nea Amoroza / Kemek Transport)
Tel: +357 2693 1755 (Astika Leoforia Pafou / Alepa Bus Company)
The network of bus transportation in Paphos is really rather good and the main places of interest around the town remain well connected by Astika Leoforia Pafou buses, with fares being fixed and the same for all destinations. Located within the Ktima area and on the corner of Thermopylon Street and Athinas Street, the main bus station is easy to find and a good place to pick up a timetable. If you wish to travel outside of Paphos, then the Kemek bus lines run to resort towns and cities all across Cyprus. 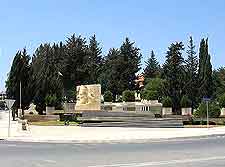 Tel: +357 0777 7474 (Travel and Express)
Tel: +357 2624 4013 (Daphne Taxi)
There are two main types of taxi transport available in Paphos - private taxis and also service taxis. Private taxis tend to be a little more pricey and used by individuals, while service taxis are usually shared by groups or multiple passengers, meaning that the overall costs are also shared, therefore being reduced. Travel and Express is an especially reliable company operating service taxi transport in Paphos, with popular destinations including Larnaca, Limassol, Nicosia and Polis, amongst other Cypriot resorts and cities. 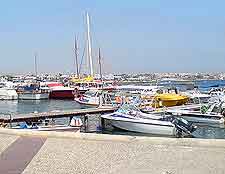 The port of Paphos is home to a small marina, with mooring for approximately 300 boats. This marina area has become a vibrant part of the resort and is surrounded by eateries with outdoor tables and waterfront views, serving the catch of the year.

Regular cruise ships arrive here from Limassol, while pleasure cruises are often available. Nearby, Coral Bay is the site of a new, much larger marina development.