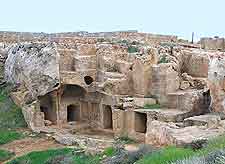 With UNESCO World Heritage Sites, ancient Roman remains, historical landmarks and Cypriot monuments, Paphos really does have much more to offer than simply its beautiful beaches. Unmissable landmarks in this area of Cyprus include the Tombs of the Kings, the Nea Paphos Archaeological Site and also the Agios Lambrianos Rock-Cut Tomb.

A famous and eye-catching landmark that regularly appears on local publicity material and postcards, the Fort of Pafos is a small shell, built to guard the very entrance of the harbour. To enter the fortress, you will need to cross the moat via a stone bridge. Also on note in Paphos is the Agia Solomoni and the Christian Catacomb, the Hrysopolitissa Basilica and St. Paul's Pillar, and the Agia Paraskevi Church. 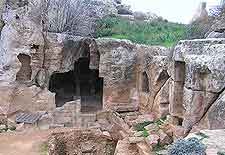 Tombs of the Kings

Address: Paphos, Cyprus
An acclaimed Cypriot World Heritage Site, the Tombs of the Kings is just a 2-km / 1.5-mile drive from central Kato Pafos, in the direction of Coral Bay. This impressive necropolis is home to a series of underground tombs and chambers, which are in remarkable condition and was used by the people of Neo Pafos from the 3rd century BC onwards, encompassing both the Hellenistic and Roman eras. Although these chambers are officially named the Tombs of the Kings, they were in fact not used by royalty at all, but simply earned that title since they have such a grand appearance. Seven fully excavated tombs are open to the public, with the third being the most impressive and boasting its very own underground atrium.
Open hours: daily, May to September - 08:30 to 19:30; October to April - 08:30 to 17:00
Admission: charge

Address: Paphos, Cyprus
Tel: +357 2694 0217
Occupying the western side of Kato Pafos, the Nea Paphos Archaeological Site lies within the region of New Pafos (Nea Pafos). This ancient city was established in the 4th century BC, at the period when Cyprus was part of the global kingdom of the Ptolemies. Formerly encircled in its entirety by huge walls, the streets of the Paphos Archaeological Site were laid out in an incredibly organised rectangular structure. Following a serious earthquake in the 4th century, Nea Pafos soon fell into a state of disrepair and went into a rapid decline. It was at this time that Salamis, on the eastern side of Cyprus, became the island's new capital. Specific attractions around the site include both the House of Theseus and the House of Dionysos villas, where some stunning Roman mosaics can be seen.
Open hours: daily - 08:00 to 19:30
Admission: charge 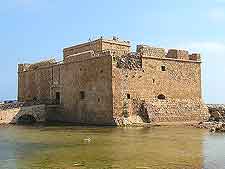 Address: Paphos, Cyprus
Once inside the Fort of Pafos, most visitors choose to climb to the top and enjoy the uninterrupted views across the harbourfront and marina. The fort was built by the Lusignans at the end of the 14th century, partly destroyed a century later by the Venetians, and then partially renovated by the Ottomans. A major highlight here is the seasonal Paphos Aphrodite Festival, which takes place each September.
Open hours: daily, May to September - 09:00 to 18:00; October to April - 09:00 to 17:00
Admission: charge 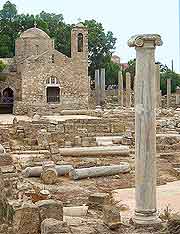 Agia Solomoni and the Christian Catacomb

Address: Paphos, Cyprus
Situated alongside the Fabrica Hill are two vast underground caverns, which are believed to date from as far back as the beginning of the Hellenistic period. There are also further burial chambers located here, linked with the St. Misitikos and St. Lambrianos. These tombs feature some elaborate frescoes and clearly show that this spot was regarded as an important place of Christian worship.
Open hours: daily
Admission: free 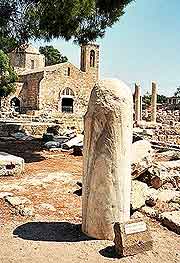 Address: Paphos, Cyprus
An extensive historical site with free admission and many ancient attractions, the remains of the Hrysopolitissa Basilica clearly show the epic proportions of this magnificent Christian landmark, which is believed to have been constructed in the 4th century. Destroyed during the Arab raids of the mid-7th century, the Hrysopolitissa Basilica was rebuilt a number of times over the subsequent years and its present incarnation is the relatively small Agia Kyriaki church. Various green marble columns and mosaics are spread around the site and can be viewed behind the ropes. To the west of the basilica remains, the St. Paul's Pillar is of great historical significance in Paphos, since it is said that St. Paul was tied here and whipped by the Romans.
Open hours: daily
Admission: free 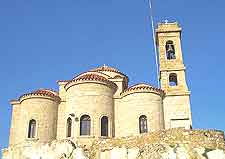 Address: Paphos, Cyprus
Regarded by locals to be one of the most beautiful of all the churches in the Paphos area, the Agia Paraskevi stands on the eastern side of the town, in the Geroskipou area. This Byzantine church is crowned by no less than six domes and contains a series of 15th-century frescoes, many of which are in good condition or have been restored in recent years. As you enter the Agia Paraskevi, you will be greeted by the site of the Last Supper fresco, as well as two further religious paintings depicting the 'Betrayal' and the 'Washing of Feet'.
Open hours: daily - 08:00 to 13:00, 14:00 to 17:00
Admission: free