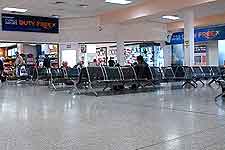 Paphos International Airport is the second-largest flight hub on the holiday island of Cyprus, serving an annual total of over two million passengers, many of which head for the beaches on the island's south-westerly coast. This is a base for the low-cost Irish carrier Ryanair, as well as a good number of other budget airlines, with frequent flights connecting destinations all over the UK and Europe. Charter companies such as Thomson and Thomas Cook also use this facility.

Managed since 2006 by Hermes Airports Ltd, the site increased its capacity in 2008 with the building of a new, ultra-modern terminal with 28 check-in desks, 22 aircraft stands, seven gates and a much improved selection of passenger amenities, including access for the disabled. In the spring of 2012, Ryanair opened 15 new routes from this base, keeping two aircraft on permanent standby and increasing its number of weekly fights from the airport to more than 80.

Paphos International Airport is ideally located close to Paphos city and gives easy access to the popular tourist resorts of Limassol and Coral Bay. Its facilities now include restaurants, cafés, bars, a bank, a tourist assistance desk, car rental and duty free shops, as well as amenities for parents with babies. A four-lane fast road has recently been constructed in order to allow motorists a chance to avoid the notoriously crowded access roads between the airport and the city. Access to Paphos city from the airport is by bus, taxi or hire car. 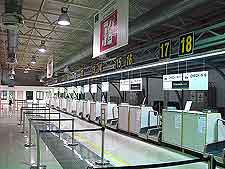 Address: Paphos, Acheleia, 8320, Cyprus
Tel: +357 2680 1800
The airport lies close to the holiday villages of Kouklia and Mandria, some 16 km / 10 miles to the south-east of Paphos city on the B6 main road. From the city centre, links to the lovely coast road take visitors to the beaches, the Troodos mountain range and Limassol. Other favourite holiday spots such as Kolossi, Episkopi Bay and Khlorakas are also within easy reach.

Onward transportation by car to Paphos city, a 15-minute drive away, is relatively straightforward. However, it should be noted that the E603 / B6 route is often crammed with traffic during the high season. The new approach road provides much-needed faster access to the city and nearby beach resorts.

Two local bus companies, Limassol Airport Express and OSYPA Ltd, operate bus services between Paphos International Airport, the city and Limassol. Bus number 612 operates from the terminal to central Paphos regularly during the day, with a reduced service on Sundays.

Taxis are the most expensive option for transportation from the airport, although their convenience is unmatched. Onsite taxis are to be found at the rank situated just outside of the terminal. Passengers should note that taxi prices peak on Sundays and during national Cyprus holidays.