Paphos may be a leading beach resort, but it also celebrates its rich Cypriot history in the form of museums. In particular, the Ktima district of Paphos is home to some outstanding themed museums, which are dedicated to both archaeology and ethnography.

There is history scattered all around Paphos, within the various churches, basilicas, old buildings and parts of the coastline. Close by and in the nearby village of Steni, south of Polis Chrysochou, the popular Steni Museum of Village Life is certainly worth the short journey. 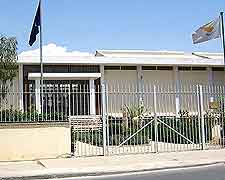 Address: Leoforos Georgiou Griva Digeni, Ktima, Paphos, Cyprus
Tel: +357 2694 0215
Although the Paphos Archaeological Museum may be a little on the small side, it is certainly cram-packed with a large and impressive collection of historical relics, some of which date back as far as the Neolithic period. The exhibits are spread around four different rooms, with highlights including everything from old pieces of pottery and terracotta figurines, to coins and even a number of ancient Roman artefacts. Those wishing to pay a visit to the Archaeological Museum will find it situated just a short walk from the centre of the Ktima district.
Open hours: Monday to Friday - 09:00 to 17:00, Saturday and Sunday - 10:00 to 13:00
Admission: charge

Address: Hlorakas, Paphos, Cyprus
A national cultural attraction celebrating 20th-century Cypriot history, the Agios Georgios Museum is located on the very spot where the sailing ship named the 'Agios Georgios' arrived in 1954. The Agios Georgios landed here with its substantial cargo of arms and weaponry, brought to begin an uprising, to overthrow the British colonial rule of Cyprus. This site is named the 'Grivas Landing' after the captain Georgios Grivas, and stands some 4 km / 2.5 miles to the north of Kato Pafos, near to Lemba village. The museum itself documents the plotting and subsequent capture of these rebels, and is easy to spot, since it lies alongside the Agios Georgios church.
Open hours: daily - 09:00 to 18:00
Admission: free

Address: Exo Vrysis 1, Ktima, Paphos, Cyprus
Tel: +357 2693 2010
Privately owned and managed, the popular Ethnographical Museum is filled with history, in the form of colourful traditional costumes, historical household utensils, old amphorae and tools from past Cypriot centuries. The Chalcolithic axe heads are especially significant, while outside, the gardens boast a Hellenistic tomb, cut from rock. At first glance, the collection does seem a little confusing and therefore, you will likely find your visit all the more enjoyable if you purchase the inexpensive guide book upon your arrival.
Open hours: Monday to Saturday - 09:00 to 18:00, Sunday - 09:00 to 13:00
Admission: charge

Address: Steni, Cyprus
The Steni Museum of Village Life is an attraction suiting those who are keen to learn more about the past traditional lifestyle of Cypriots, with exhibits spanning the 19th century and right up to 1945. The Steni Museum of Village Life opened as recently as 2008 and occupies the ground floor of the village's spacious Community Centre, where it successfully preserves the history of the village and the hard life of its past residents. This attraction has been awarded a five-star rating by the Cyprus Tourism Organisation (CTO).
Open hours: April to October, daily - 10:00 to 18:00; November to March, Monday to Friday - 10:00 to 16:00
Admission: free, donations welcomed