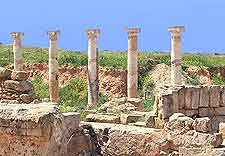 Greek goddess of love Aphrodite is said to have been born on the outskirts of Paphos, while the Ptolemies, the Greeks, the Romans, the Venetians and the Turks all left their mark here, along with the British. The interest was very much due to the city's strategic positioning on the south-western shore of Cyprus.

The history of Paphos is a rich and often turbulent one, and is best appreciated at its archaeological sites. Old Paphos was declared a UNESCO World Heritage site as early as 1980.

The Temple of Aphrodite

People are known to have lived here towards the end of the Stone Age - the Neolithic period, worshipping fertility goddesses. As the legendary birthplace of the daughter of Zeus, Paphos became the centre of the Aphrodite following. The remains of the sprawling Temple of Aphrodite - built in the 12th century BC by the Mycenaens, are still visible today.


Further attractive historic relics from this general period come in the form of the Tombs of the Kings, hailing from the 3rd century BC. The tombs were hewn from rock and their entrance is noted for its impressive ancient Greek pillars. 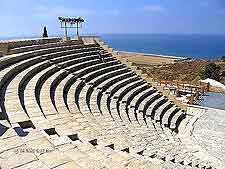 Hellenistic Times and the Roman Empire

The town was an important centre from early on, attracting Alexander the Great and the Ptolemies, becoming the Cypriot capital and playing host to Greco-Roman cultures. It thrived under the Greeks, and along with the Hellenistic influence on Cyprus was that of the ever-burgeoning Roman Empire.

The Greeks and the Romans left fortresses, palaces and villas, with remains clearly visible in and around town. The town's mosaics are especially prized, along with the history behind them. They can be seen in the Nea Paphos Archaeological Site and date from the 2nd century AD, with interesting mosaic tours being very popular.

The Romans plundered riches, but also imparted their superior architectural worth on the town, along with roads to other towns in Cyprus. They built the Odeon Theatre in the 2nd century AD and a stunning, albeit somewhat diminutive, amphitheatre that is still used for concerts today.

Christianity gained a foothold in the town and was generally well received, although Saint Paul took a whipping at the Pillar of Saint Paul in the year of 45 AD. The Jewish Rebellion of 117 AD is another noted event in the early history of Paphos, while the Greeks and Romans faded. 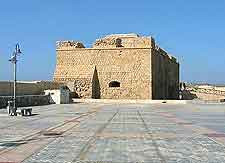 Although the end of the Roman Empire saw invaders topple Paphos, the Byzantines mostly controlled Cyprus well into the Middle Ages. The Crusaders and the Lusignans also had interests in this town, followed by the Venetians (to 1571) and the Ottoman Turks (to 1878).

Byzantium left its mark, including that of the 14th-century Fort of Pafos (Paphos Castle), which was damaged by the Venetians and then later rebuilt by the Turks. This medieval Byzantine fortress still stands sentinel-like over the harbour and provides fantastic views. 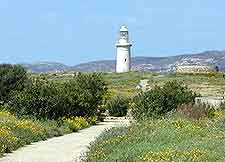 The British and Modern Times

Britain also had its hand in proceedings during its tenure of Cyprus (to 1960), although, in general, Paphos had already declined from the Greco-Roman and Middle Ages periods. Cyprus gained independence from Britain in 1960, eventually paving the way for the Turks to invade in 1974.

Though many other Greek-Cypriot towns declined, Paphos was made the hub of the Cyprus government and became a major tourist destination. Today there are two towns - the upper commercial administrative centre and the lower, old 'Kato Paphos' town.

Most hotels and tourist attractions reside within the lower part, which contains a pretty coastal strip. The archaeological remains and interesting facts about Paphos history are best learned about at the town's Archaeological Museum on the Leoforos Georgiou Griva Digeni.