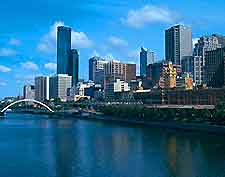 Melbourne is known as Australia's arts and cultural capital and it is the country's second-largest city. While Melbourne may lack some of Sydney's size, sunshine and sparkling beaches, it hosts Australia's premier restaurant and student scenes as well as a cluster of annual international sporting events.

Melbourne is a bustling business centre and the Australian communications, television and theatre industries are largely based here. New high-rise developments have introduced prestige urban living and prices to match a city that is otherwise much better value than Sydney.


Adjacent to the expensive apartment towers of central Melbourne are equally pricey residential suburbs like Toorak, while property in working-class suburbs like Carlton and Richmond, which are still very close to downtown but at least a third cheaper, offers an economical alternative. Prices drop by up to half in Melbourne's great value outer suburbs and the city's superb public transport network means that even life on the city fringe seems close to the action.

Melbourne's palatial Southbank district is home to Crown Entertainment Complex and several glittering new apartment towers. Here is where luxury serviced apartments can be sourced, while across the river in central Melbourne equally good accommodations can be found for about two-thirds the price. Non-Australia citizens can take out leases and mortgages on properties in Melbourne. Some real estate agents will balk at offering lengthy leases or mortgages to travellers on tourist visas, and all non-resident property dealings need to be cancelled at the end of the expat's time in the country - foreigners cannot buy and then sub-lease Australian real estate if they are not based in the country.

Apartment blocks are numerous and often share the same street as private homes with large backyards and swimming pools. This is the case throughout the Melbourne metropolitan area, where around 75 percent of the population lives in detached housing, and prices decrease with further distance from downtown, with central properties up to twice or three times the price of similar accommodations out of the central area.

All the national real estate chains have outlets throughout Melbourne and all suburbs have private realtors with decades of experience in the local market. Greek is spoken widely in Melbourne, as is Italian, but all leases and other documentation will be drawn up in English.

Check out the following Melbourne realtors and real estate agents: