When it comes to churches and religion, Melbourne is certainly a city with much to shout about. There is an extraordinary selection of places of worship peppered around the city, ranging from intimate venues to a couple of magnificent cathedrals.

St. Patrick's Cathedral serves as Melbourne's Roman Catholic Archdiocese and lies in the central core of the city, in between Parliament Gardens and Fitzroy Gardens, across from the Park Hyatt Hotel. Just a short walk away and next to Federation Square, the Yarra River and Chapter House Lane, St. Paul's Cathedral is the metropolitan church of the Anglican Diocese. Flinders Street Station is located extremely nearby, for those arriving here by train. 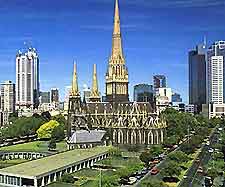 The cathedral is closely associated with Irish Catholicism in Australia, with many of the earliest immigrants originating from Ireland.
Open hours: Monday to Friday - 06:30 to 18:00, Saturday and Sunday - 07:15 to 19:30
Admission: free 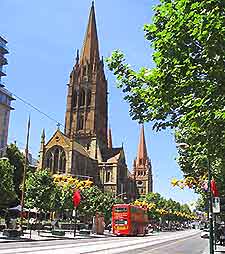 Address: Flinders Street / Swanston Streets, Melbourne, Victoria (VIC), Australia
Tel: +61 (0)3 9650 3791
Completed and consecrated in 1891, St. Paul's Cathedral quickly became the headquarters of Melbourne's Anglican faith and is today regarded as one of the city's most important buildings. Featuring particularly elaborate architecture, statues, patterned floor tiles and a highly decorated interior, St. Paul's was designed by William Butterfield, famous for his strong Gothic Revival style in England. Outside you will find an impressive statue of Matthew Flinders, famous for becoming the first sailor to circumnavigate the Australian coastline during the early 19th century.
Open hours: daily - 07:00 to 19:00
Admission: free

Address: Albert Street / Nicholson Streets, Melbourne, Victoria (VIC), Australia
The centrally located St. Peter's Church was built in the mid-19th century and two years after it was completed, Melbourne was proclaimed a city from its very steps. Now one of the oldest buildings in the city, St. Peter's Church is located at the top end of Parliament Gardens, where it boasts impressive architecture, many period features and detailed carvings.
Open hours: daily
Admission: free

Address: Bogong Avenue, Glen Waverley, Melbourne, Victoria (VIC), 3150, Australia
Tel: +61 (0)3 9560 3580
Glen Waverley Uniting Church, on the outskirts of Melbourne, is an important family church, strongly committed to the community. With a number of seasonal events, regular services, a well-attended Sunday School, a Youth Club and religious groups, the Glen Waverley Uniting is one of the most noteworthy religious venues in this area of the city.
Open hours: Monday to Friday - 06:30 to 18:00, Saturday and Sunday - 07:15 to 19:30
Admission: free

Other churches and religious buildings in and around central Melbourne include: