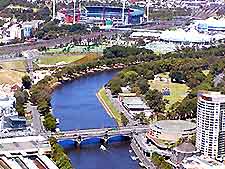 Melbourne offers very reasonably priced accommodation and even some of the city's luxury hotels are becoming affordable. There is also plenty of budget lodging to be found within Melbourne, suiting both backpackers and holiday makers looking to save some pennies.

Various youth hostels reside within central Melbourne, on roads such as Flinders Lane and King Street, while for longer stays during student holidays, decent accommodation is often available at colleges around the city, such as the university's Medley Hall and Ormond College. If you want to stay in the very heart of the action, then the hotels within the city centre are most suitable, being within walking distance of leading bars, restaurants and popular sights. 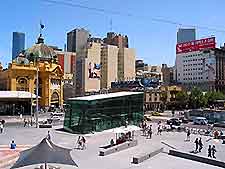 Others choose to stay within East Melbourne, where accommodation enjoys an altogether more peaceful and leafy setting, often being separated from the city centre by large parks. For coastal views and beach attractions, the suburb of St. Kilda is well worth considering and is home to the historic Luna Park, where roller coasters overlook Port Phillip Bay. Other appealing suburbs include Albert Park, Carlton, Caulfield, Fitzroy, Middle Park, Parkville, Queens Road, Richmond, South Yarra, Southgate and Williamstown.

Melbourne's hotels are often filled to capacity and reservations may be necessary several weeks in advance during peak seasons and major events. Accommodation soon becomes scarce during the Australian Open tennis championship in January, the St. Kilda Festival in February, and the Australian Formula One Grand Prix in March, all of which attract literally hundreds of thousands of visitors to the city each year.

Hotels in central Melbourne tend to drop their room rates at the weekends, as business travellers make up much of their business between Monday to Friday. The busiest tourist season is during the Australian summer months, between December to February, and many hotels tend to rise their rates at this time.

Other accommodation is available on the outskirts of Melbourne, in scenic areas such as the Yarra Valley and the Mornington Peninsula, where you will find many boutique-style hotels and guest houses.