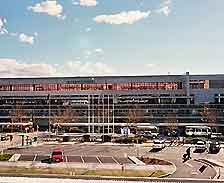 Australia's important city of Melbourne is easy to reach by air, being linked to the world via its busy international airport. This is a significant hub for airlines such as Jetstar, Qantas and also Virgin Australia, which between them connect many domestic destinations and prominent New Zealand cities.

Melbourne Airport is currently called home by a total of four individual terminals, which together comprise almost 60 different gateways. Terminal 1 is solely used for domestic flights by airlines such as Qantas, while Terminal 2 is for international services. The third is used by Regional Express, Skywest Airlines and Virgin Australia, while the fourth was previously named the South Terminal and is served by budget 'no-frills' airlines such as Tiger Airways Australia.

Address: Gladstone Park, Tullamarine, Victoria 3043, Australia
Tel: +61 (0)3 9297 1600
Melbourne Airport is located just 22 km / 13 miles to the north-west of the city, being based alongside the suburbs of Gladstone Park, Tullamarine and Westmeadows. Now handling almost 30 million passengers on an annual basis, this has grown to become Australia's second-largest and second-busiest air facility, after Sydney's international airport.

If you are planning to rent a car when you arrive at the airport, then you will find six different car hire companies based here, located on the lower level of the short-term car park. Driving into central Melbourne is quite straightforward and should take in the region of 30 minutes, with the city centre being best reached via the Tullamarine Freeway and the Citylink Tollway.

A popular 'Super Shuttle' service is operated by Skybus, travelling from the airport's terminal buildings into central Melbourne and other nearby towns. These buses run 24 hours a day at 15-minute intervals during daytime, and every 30 to 60 minutes during the night.

Also worth noting, Public Transport Victoria (PTV) runs a SMARTBUS service between Melbourne Airport and Frankston, heading along the Tullamarine Freeway to the Frankston Station, and stopping off at a huge number of locations along the way. These include the shopping centres of Broadmeadows, Epping Plaza, Gladstone Park, Knox City, Plenty Valley, Roxburgh Park and The Pines.

Many hotels in central Melbourne choose to lay on their very own door-to-door courtesy shuttles for their guests, travelling both to and from the airport. It therefore makes sense to enquire whether or not this service is available when you book your room.

A large number of taxis are readily available at Melbourne Airport (MEL). Located outside of the Main Terminal, the South Terminal and the Qantas Terminal, taxis await their fares in designated zones. Additional nominal fees are applied for airport departures and pre-booking, as well as excessive luggage and late-night journeys. It is worth noting that prepaid taxi fares are applicable between the hours of 10:00 and 17:00. If you have more expensive tastes, then it is simple to arrange for a limo to collect you as you arrive, or drop you off when you are flying home.