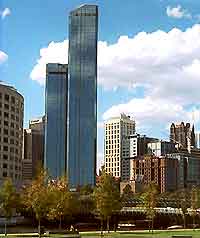 A number of Melbourne's oldest landmarks date back more than two centuries and add an important injection of history to the city. Other architectural monuments are somewhat more youthful in their appearance, such as the Rialto Towers skyscraper of the 1980s.

A taste of the past can be enjoyed when visiting the late 19th-century Melbourne Town Hall. Construction of this important city landmark lasted some 20 years and the Town Hall officially opened its doors in 1887, with the portico being added shortly afterwards. A few decades older is the Parliament House of Victoria, which may one day soon be finally topped by the grand dome envisaged by its original architect all those years ago.

Further sights of much note are to be found within the neighbouring suburbs of Altona, Caulfield, Elsternwick, Frankston, Mordialloc, Mornington, South Yarra, Spotswood and St. Kilda, where visitors will discover a number of stately homes, old piers and imposing bridges.

Address: 525 Collins Street, Melbourne, Victoria (VIC), 3000, Australia
Tel: +61 (0)3 9629 8222
Measuring over 250 metres / 820 feet in height, the Rialto Towers complex has been the tallest building in the whole of Melbourne since opening in 1986, and was also the tallest building in the Southern Hemisphere for many years. Standing in the city centre, these two adjoining towers feature an observation deck, which provides stunning panoramic views of the cityscape and beyond, and comes complete with a café, a gift shop and a video about the development of the city. One of the most striking features of 'The Rialto' is the semi-reflective glass exterior, which was designed to change colour when the sun begins to set. In total, there are some 13,000 individual windows and more than 35 elevators, which offers an indication of the sheer scale of this giant architectural monolith.
Open hours: Monday to Thursday - 10:00 to 22:00, Friday to Sunday - 10:00 to 23:00
Admission: charge, discounts available for students, seniors, children and families 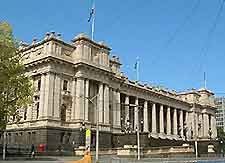 Despite these elements being left out, the Parliament House remains a palatial-looking building. Over the years the governments have discussed building the dome, although the considerable cost of this work has been off-putting so far.
Open hours: daily, tours at 10:00, 11:00, 12:00, 14:00, 15:00 and 15:45
Admission: free 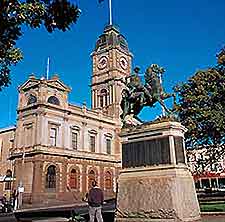 Address: Collins Street, Melbourne, Victoria (VIC), 3000, Australia
Tel: +61 (0)3 9658 9658
The Town Hall stands proudly in the heart of the city centre, alongside the Athenaeum Theatre, and is without doubt one of the most splendid landmarks in Melbourne. Highlights include guided tours and a number of seasonal events, such as theatrical performances, concerts and various exhibitions. Of note, the city's popular International Comedy Festival uses the Town Hall as one of its venues.
Open hours: Monday to Friday - 10:00 to 16:00
Admission: free

Address: Pier Street, Altona, Victoria (VIC), 3018, Australia
Altona Pier is located in the Inner West area and is a little under a 30-minute drive from the city. Anglers frequently come here to catch squid and many seasonal fish. The sandy beach, the esplanade and the RJ Logan Reserve are all additional attractions, along with the Altona Ice outlet, which sells ice creams, hot and cold drinks, fish and chips, and other refreshments.
Open hours: daily - 24 hours
Admission: free

Address: Lechlade Avenue / Williams Road, South Yarra, Melbourne, Victoria (VIC), 3141, Australia
Tel: +61 (0)3 9827 2500
The Como House Mansion is to be found in the South Yarra area, next to Como Park and close to the Rockley Gardens. This important historic landmark dates back to the middle of the 19th century and features elegant architecture, many period details, tea rooms and landscaped gardens. The mansion is now the property of the National Trust and regularly stages fun events, which in the past have included twilight 'Spook Spotters' tours, seniors week, vintage car shows and a springtime tour of the gardens.
Open hours: daily - 10:00 to 17:00
Admission: charge, discounts available for children and families, members of the National Trust are free

Address: 205 Nelson Place, Melbourne, Victoria, 3016, Australia
Tel: +61 (0)3 9397 6040
The historic Williamstown Docks mark a trendy part of the city, residing roughly 14 km / 9 miles to the south-west of the Central Business District. Now home to a number of street cafés, restaurants and wine bars, the docks are a safe bet for an evening out. Neighbouring places of interest include the Commonwealth Reserve, the JE Morley Reserve and the HMAS Castlemaine museum ship.
Open hours: daily - from 10:00
Admission: free 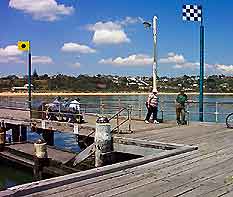 Address: Liddesdale Avenue, Frankston, Victoria (VIC), 3199, Australia
Located to the far south of Melbourne, Frankston Pier is popular with fishermen from all over. This lengthy L-shaped pier is roughly 500 metres / 1,640 feet long. If you are coming here with your fishing rod, there is a good chance that you may catch sea trout, snapper and even barracouta. Close by and on the beachfront promenade is the Frankston Visitor Information Centre, along with a large car park and the Sofia Restaurant, where seafood pancakes have become something of a speciality.
Open hours: daily - 24 hours
Admission: free

Address: 2 Manor Grove, Caulfield, Melbourne, Victoria (VIC), 3187, Australia
Tel: +61 (0)3 9527 6295
Based within St. Kilda East, Labassa House is a grand stately home now owned and managed by the National Trust. The house is opened to members of the public and features lots of antique furniture, old paintings and a grand interior, full of historic detail and interesting artefacts.
Open hours: last Sunday in month - 10:30 to 16:30
Admission: charge, discounts available for children and families, members of the National Trust are free

Address: Dallas Brooks Drive, South Yarra, Melbourne, Victoria (VIC), 3141, Australia
Tel: +61 (0)3 9654 5528
LaTrobe's Cottage is a charming cottage within the South Yarra area, close to the Melbourne Cricket Ground. This old building dates back to the mid-19th century and was shipped all the way from England as a glorified prefabricated kit. Owned by the National Trust organisation, the cottage is now considered to be of architectural significance and is listed on the Victorian Heritage Register.
Open hours: Monday, Wednesday, Saturday and Sunday - 11:00 to 16:00
Admission: charge, discounts available for children and families, members of the National Trust are free

Address: Beach Road, Mordialloc, Melbourne, Victoria (VIC), 3195, Australia
The attractive Mordialloc Pier resides some 40 minutes to the south, being close to both Braeside and Parkdale, and popular with keen anglers. With many fish living close to the pier, including barracouta, experienced anglers can be confident that it won't take long to get a bite when fishing here.
Open hours: daily - 24 hours
Admission: free

Address: Schnapper Point, Mornington, Victoria (VIC), 3931, Australia
Mornington Pier stands roughly an hour to the south of the city, where it remains an important historic landmark within this neighbouring suburb. Home to excellent fishing, the pier has sadly seen better days and is very much in need of repair, although there is a possibility that the yacht club will build a marina here, meaning that the pier may cease to exist.
Open hours: daily - 24 hours
Admission: free

Address: Jacka Boulevarde, St. Kilda, Melbourne, Victoria (VIC), 3182, Australia
Popular throughout the year with local anglers, St. Kilda Pier lies to the south of the city centre. Fish regularly caught here include both sea trout and flathead. The pier is an impressive structure, with the St. Kilda Pavilion being located right at the end, where it was constructed in 1904. Of note, the pavilion now appears on the Victorian Heritage Register.
Open hours: daily - 24 hours
Admission: free 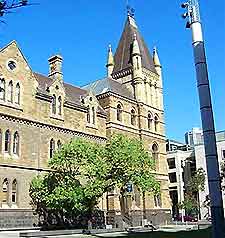 Address: 328 Swanston Street, Melbourne, Victoria (VIC), 3000, Australia
Tel: +61 (0)3 9669 9888
Located on Swanston Street and close to the Central Shopping Centre, the State Library of Victoria ranks amongst Australia's largest. More than 150 years old, this grand building quickly became an important resource in the city centre, when it opened in the mid-19th century, and is now called home by a staggering two million+ books.

The library also houses some extremely important historic documents, including letters from Captain James Cook, along with diaries from the actual founders of the city. Featuring eye-catching architecture, including a large domed area, regular guided tours are available and can prove quite insightful.
Open hours: Monday to Thursday - 10:00 to 21:00, Friday to Sunday - 10:00 to 18:00
Admission: free 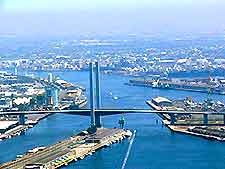 Address: Southbank Promenade, Melbourne, Victoria (VIC), 3000, Australia
The Yarra River could perhaps be described as being the most important of all the city's landmarks and has played a major part in the way that Melbourne has evolved over the years. This prime natural feature can be muddy at times and in recent years the city has made a conscious effort to clean up the river and improve the water quality. There many beautiful old bridges crossing the river, with countless tourist attractions, parks, pathways, cycle trails and historic buildings lining the riverbanks. Boat cruises are always popular with visitors to the city and these depart from Princes Walk, as well as from Southbank.
Open hours: daily - 24 hours
Admission: free

Address: Westgate Freeway, Spotswood, Victoria (VIC), 3015, Australia
Spanning the Yarra River and standing close to Port Phillip, the West Gate Bridge is simply enormous and took almost 15 years to build. When it finally opened in the late 1970s, this lengthy cable-stayed construction became one of the largest and longest bridges in the whole of Australia, measuring in at some 2,580 metres / 8,465 feet in length. Situated in the Inner West area, the Westgate Bridge connects Melbourne with nearby Williamstown, meaning that this suburb is now within easy reach of the city.
Open hours: daily - 24 hours
Admission: free