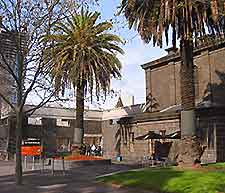 Address: Russell Street, Melbourne, Victoria (VIC), 3000, Australia
Tel: +61 (0)3 9663 7228
Old Melbourne Gaol first opened in 1845 as Melbourne's first prison and is now a fairly macabre and quite fascinating museum in the heart of the city centre. This is without doubt one of the city's most interesting and popular museums, recalling the history of more than 100 prisoners, all of which were hanged here.

Attractions at the Old Melbourne Gaol include a large display of instruments used to torture the prisoners - including a kidney belt, single and multiple canes, a flogging machine and much more besides. Full of stories and history, the Old Melbourne Gaol has been home to many infamous villains and convicts, such as Ned Kelly, who was hanged here in 1880. The armour of Ned Kelly is one of the main exhibits onsite, along with the numerous stories about the inmates. Many of the reasons for the imprisonments seem ludicrous in today's society, such as selling furniture on hire purchase. 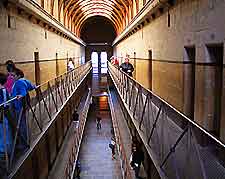 The Old Melbourne Gaol is built of bluestone and was used as Melbourne's prison until 1929. Now owned and managed by the Victorian branch of the National Trust, other attractions here include a number of death masks, including one of the well-known criminal George Melville, who was hanged here in 1853 after his involvement in a gold robbery. The casts are from the convict's head after death.

The masks were then examined in depth to see if there were any markings or bumps in common, which might be used to identify men with criminal tendencies. Of course, the findings were somewhat inconclusive and quite subjective. 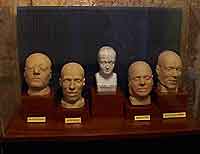