Melbourne Weather, When to Go and Climate Information 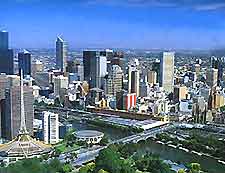 Melbourne has a particularly mild oceanic climate, with fine weather all year round and no great extremes. This sunny city is comfortable to visit at any time, although the summer months of December, January and February are often quite hot, with constant fine weather.

The climate of Melbourne is greatly affected by its position next to hot inland areas, as well as the considerably cooler southern ocean. As a result, cold fronts can often form, resulting in occasional downpours of rain and possibly thunderstorms.

The autumn / fall months of March, April and May are delightful and Melbourne enjoys fine days and pleasant, mild nights. Spring is between September to November.


Average summer temperatures in Melbourne are around 25°C / 77°F, although on the hottest of days, these temperatures can peak at over 40°C / 104°F. Port Phillip is known for being an especially warm spot in the city, due to its bayfront situation.

Winters here tend to be colder than other Australian state capitals, although the lowest temperature ever recorded only just dipped below freezing. Occasional snow flurries may fall around the easterly outskirts and on nearby Mount Dandenong.

Melbourne has half the average rainfall of nearby Sydney and Brisbane and generally enjoys more than 300 sunny days each year.

The following are the normal daily temperature ranges for Melbourne: 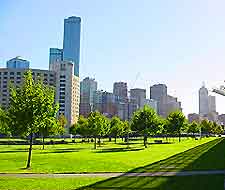