Getting Around, Melbourne Travel, Transport and Car Rental 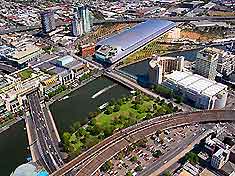 The city of Melbourne is well served by the public transport system, which includes an excellent network of buses, trains, a City Loop underground train network and historic trams, providing Melbourne with good connections throughout Victoria and Australia as a whole. Melbourne is located close to many other interesting towns, cities, tourist attractions and national parks, and many visitors in Melbourne also travel outside of the city of Melbourne, into the surrounding areas of Victoria and beyond.

Renting a car is often the preferred method of transport for excursions from Melbourne and it is relatively easy to travel around the Melbourne area by car. There are a number of major roads situated on the outskirts of Melbourne, which provide fast and convenient routes when travelling both to and from Melbourne. 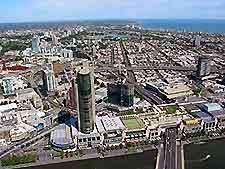 The district of Melbourne is served by a number of major roads and highways. Road access to Melbourne is excellent and renting a car provides an easy way to travel to many of the finest features outside of Melbourne, such as Victoria's splendid national parks, remote beaches, nature reserves, small towns and mountains.

Buses in Melbourne are operated by a privatised bus network and support Melbourne's train and tram network. Buses tend to travel at different times to the trains and trams, supplementing this extensive service. Melbourne's buses travel to areas such as outer suburbs, hospitals, university campuses, shopping malls and major tourist attractions. There are numerous bus stops throughout Melbourne, with bus timetables and route information.

Coaches in the Melbourne and Victoria area travel further afield, to nearby suburbs, towns and cities. Melbourne's coaches are an affordable and relaxing way to travel outside of Melbourne. 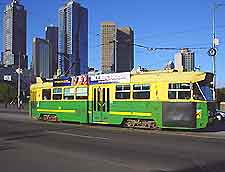 Melbourne's historic tram system is a major feature in central Melbourne and tram routes travel all over the city of Melbourne, including many of the inner suburbs. All trams routes travel out from Melbourne city centre and are numbered. Trams in Melbourne travel along most routes every 6 to 8 minutes during peak commuting hours and around every 10 minutes at other times. Melbourne's historic trams might not be the fastest way to travel in Melbourne, but it is certainly one of the most memorable, and it is completely free.

Melbourne has an impressive and reliable train network that covers Melbourne city centre, many of Melbourne's suburbs and beyond. The main train station in the Melbourne and Victoria area is in Flinders St. Railway Station, in central Melbourne, located on the corner of Flinders Street and Swanston Street. Most trains travel from 05:00 and finish at midnight, operating around every 10 minutes during peak commuting times, every 15 to 20 minutes at other times, and every 30 minutes after 19:00 on weekdays and at the weekend. Bicycles are permitted on trains during off-peak times and at the weekends.

Taxi cabs in the city of Melbourne are always yellow, regardless of which taxi firm they are from, with a noticeable strip of yellow and green checks running along their sides. Melbourne's taxis are one of the most convenient ways to travel around the Melbourne and Victoria area and taxis can be readily caught from the many taxi ranks in Melbourne city centre, next to major hotels, outside of Melbourne's train station, at Melbourne Airport, on the corner of William Street and Bourke Street, on the corner of Melbourne's Elizabeth Street and Bourke Street, on Lonsdale Street and along Franklin Street. Taxis in Melbourne are usually fairly cheap and in the more quiet districts of Melbourne and Victoria, taxis can be ordered by telephone and your hotel will be happy to recommend many reputable taxi firms. Additional taxi charges in Melbourne are often made for luggage, travel late at night, extra passengers and travel on public holidays, so it is sensible to agree any extra charges before starting your taxi journey. Taxis for disabled passengers can also be booked.

Two ferry services operate in Melbourne, travelling to Gem Pier in Williamstown, one from Melbourne city centre and another boat from Melbourne's St. Kilda district. Operating daily, the ferry runs all year round. There are also a number of cruise options available in the Port Phillips Bay and along the scenic Yarra River.

Bicycles are a particularly popular way to travel around many of the recreational areas of Melbourne and Victoria and much of Melbourne is generally very flat. There are also countless cycle trails in Melbourne, such as the bike path that follows the Yarra River, the Maribyrnong River, the Merri Creek, and there is also a stretch from Port Melbourne to Brighton. Melbourne bicycle rental shops are plentiful in Melbourne city centre and cyclists in Melbourne should be careful of the tram tracks, which can prove hazardous.