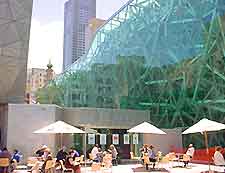 Known as Australia's cuisine capital, Melbourne serves superb cuisine from all around the world, although Europe continues to provide a particularly strong influence, especially Italian dining. Many restaurants and eateries reside within the inner suburbs, where coffee shops are certainly in plentiful supply.

Collins Street is home to the best Japanese restaurant in the city, along with food courts and award-winning dining establishments, while Flinders Lane is rather like a smaller version of New York's So Ho district. There are also many other excellent cafés, bars and eateries tucked away in Melbourne's backstreets of the suburbs. 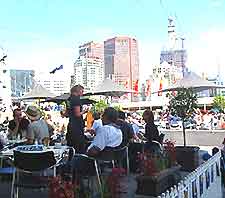 For some of the most traditional and tasty Chinese and Cantonese food in Melbourne, look no further than the impressive centrally located Chinatown district, which is based around Little Bourke Street. Here you will find a large number of Chinese, Vietnamese, Japanese and Korean restaurants.

The coastal resorts of St. Kilda, Port Melbourne and Williamstown offer some of the most relaxing and lively dining choices, many of which are located next to the beach, boasting superb views of Port Phillip Bay.

Melbourne's restaurants and cafés usually open all through the week, serving food between 07:00 and 22:00 or later. Sunday and Monday nights can be quiet, with a number of eateries choosing not to open for evening meals on these days. 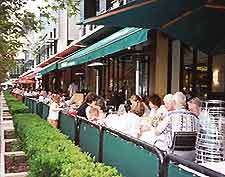 Outside many Australian restaurants you will find the letters 'B.Y.O.' or 'B.Y.O. Only', indicating that you are permitted to 'bring your own' beverage. It is necessary for restaurants to hold a relevant licence to sell alcohol, but they are able to serve it if you bring it with you when you dine. Even some licensed restaurants may allow you to bring your own wine, although a corkage charge will likely be applicable.

The wine lists found in the majority of restaurants around Victoria are almost completely comprised of Australian wines only. Throughout the world, Australian wines are renowned as being some of the best, high-quality wines, often being produced from the vineyards of the Yarra Valley. Some of Melbourne's largest restaurants may also serve wine from other countries around the world, particularly those specialising in regional food.

Breakfast in Melbourne is generally a simple affair, with continental-style cereals, porridge, toast with jam or Vegemite, fruit juice and coffee. Many hotels start serving breakfast from 06:00 or 07:00 onwards.

Lunch usually commences at midday and local restaurants within the Central Business District of Melbourne tend to fill up quickly, particularly those with al fresco dining areas. A lunchtime meal at one of the local pubs or clubs is often especially affordable, where mixed grills, chicken dishes, seafood baskets and Austrian-style schnitzels are popular - simply order your food, take a number and collect your meal when your number is called out.

When it comes to fast-food, milk bars are generally a reliable bet, serving up hamburgers with bacon and pineapple, and battered fish and chips, which is usually some form of shark (flake). Meat pies, sangers (sandwiches) and pastries are all ideal if you are headed to the beach.

Whether you fancy roasted duck or wonton soup from one of the plentiful Chinese restaurants based within Chinatown, or a barbecued steak whilst enjoying views of the St. Kilda beachfront, Melbourne certainly provides plenty of choice. Seafood is a speciality when it comes to Australian dining and rock oysters, mud crabs, bugs (similar to lobsters) and prawns all regularly make an appearance on dining menus.

True Aussie tucker is often cooked up on the barbecue, where those looking for the ultimate Melbourne dish may like to try kangaroo, emu or crocodile steaks. Diners with less adventurous palates can enjoy some superb lamb from Victoria's famous rural region named Gippsland.