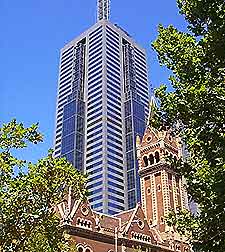 Melbourne is one of Australia's most important financial, commercial and industrial cities and is home to many of Australia's largest corporations, international companies, business headquarters and striking, modern office blocks.

The Central Business District (CBD) in Melbourne is simple to travel around, being structured around an organised grid network of roads. Melbourne's Financial District is an interesting mixture of modern architecture and historic, Victorian buildings, creating an enormous amount of character in this part of Melbourne.

Swanston Street is one of the main roads in the Central Business District (CBD) of Melbourne and has been partly pedestrianised, making this a popular shopping area, leading to the simply stunning Melbourne Central Shopping Complex and Flinders Street Station. Situated between Swanston Street and nearby Spencer Street is Melbourne's largest concentration of office blocks, skyscrapers and major corporations. This area of Melbourne is still being redeveloped and Melbourne's nearby docklands and warehouses are gradually being converted into trendy office space. There are also plans to build the tallest building in the world in this part of Melbourne. 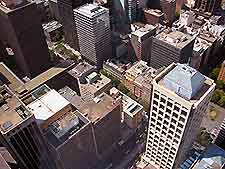 Home to an excellent travel network, including Melbourne's harbour area and Melbourne Airport, which is the second busiest airport in Australia, Melbourne is also an important transport hub which contributes greatly to its wealth and success. Melbourne has many world-class business facilities, meeting rooms and conference centres throughout central Melbourne, all with excellent business facilities, including state-of-the art communication technology.

Tourism, retail, hospitality and the vast campus of Melbourne University also make up a large part of Melbourne's thriving economy. As a result, there are an enormous range of world-class shops and restaurants in central Melbourne, providing an excellent choice for tourists, visitors and locals in Melbourne. There are a large number of historic tourist attractions and landmarks in and around Melbourne city centre. Melbourne's extremely buoyant hotel industry also reflects the high number of tourists and Melbourne is full of hotels and guest houses, often with exceptional views of Melbourne and Port Phillip Bay. 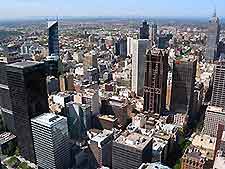 Address: Melbourne, Victoria (VIC), Australia
Most offices and businesses in the city of Melbourne are open on weekdays between 09:00 to 17:30, and most banks in Melbourne operate from 09:30 to 16:30 Monday to Thursday and remain open until at least 17:00 on Friday. Many of Melbourne's largest banking branches and offices open between 08:00 to 18:00 on weekdays. There are numerous ATM cashpoint machines located throughout the city of Melbourne. These Melbourne cashpoint machines provide a useful way to exchange currency. Most of Melbourne's shops, restaurants and hotels happily accept credit cards, including Visa and MasterCard.

Shops in the Melbourne area open from around 08:00 or 08:30 until 17:00 or 17:30 on weekdays and many shops in Melbourne have extended opening hours on Thursdays, staying open until 20:00 or 21:00. Melbourne's shops usually open all day on Saturday and although some of the shops in Melbourne do close on Sunday, many open in Melbourne city centre, particularly on Collins Street, Swanston Street and Spring Street.

A brief and friendly handshake is usually the customary greeting in Melbourne and throughout Australia as a whole. It is generally acceptable to address new acquaintances on first name terms in Melbourne. Businessmen and women in Melbourne are usually very friendly and accommodating.

Many of the restaurants and cafés in the Melbourne area have a fairly strict 'no smoking' policy, although some do cater for smokers in different areas. Most of Melbourne's offices, businesses and corporations are completely 'non-smoking' and many locals in Melbourne are strongly anti-smoking. As a rule, it is most sensible to only smoke when in the company of like-minded people in the city of Melbourne.