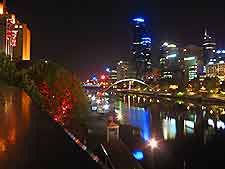 Melbourne, one of the largest and most exciting modern cities in Australia, is a popular destination at any time of the year. With a bustling and lively atmosphere, Melbourne has a particularly interesting mixture of both historic and modern buildings, many of which date back to the late 18th century. Melbourne's combination of sunny weather, world-class tourist attractions and superb Melbourne beaches, attracts people from all over the world throughout the year. 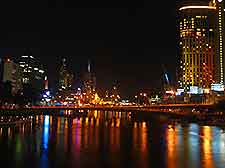 When travelling in Melbourne, as in any large city, is it advisable to always maintain an awareness of your surroundings and not look like a tourist when visiting Melbourne. Although the crime levels in Melbourne are fairly low, try to blend in, look like you know where you are going and always be careful with hand baggage, handbags, purses and money.

The vibrant, diverse city of Melbourne is home to a large number of different cultures and religious beliefs and most religions have a presence in the Melbourne area. Many Australians are at least nominally Christian in their belief, although this majority is getting noticeably smaller. Most Protestant churches in Melbourne have merged to form the Uniting Church, although the Anglican Church of Australia remains a separate entity. Catholic churches in Melbourne are particularly popular, due to a large population with an Irish or Mediterranean background. There are also numerous other religious minorities in the Melbourne area, such as Buddhists, Jews and Muslims.

Tel: +61 0(2) 9235 0333
Most pharmacies in Melbourne city centre open from 08:00 until 20:00 or later and major pharmaceutical chains in Melbourne include Soul Pattinson and Amcal, who can fill and dispense prescriptions and medicines. 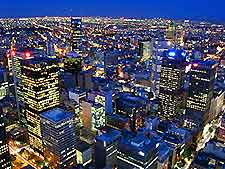 English is the most commonly spoken language in Melbourne and Australia, although many other nationalities and ethnic cultures are well represented in Melbourne. Although Australian or 'Aussie' accents in Melbourne can be strong, they are not difficult to understand.

All visitors to Melbourne and Australia as a whole need a visa and application forms are available from either Australian diplomatic missions overseas or travel agents, where you can either apply in person or by mail. An increasing number of travel agents and airlines now also grant on-the-spot Australian visas for up to three months, using the Electronic Travel Authority system (ETA).

New Zealand nationals are the only country not requiring these Australian travel visas, although they do receive a 'special category' visa when arriving in Melbourne.

There are extremely strict regulations allowing overseas visitors to work in the Melbourne area and these are issued by the Department of Immigration and Multicultural Affairs (DIMA). Many visitors aged between 18 to 30 from the United Kingdom, the Republic of Ireland, Canada, South Korea, Germany, the Netherlands, Japan and Malta may be eligible for a Working Australian Holiday Visa, lasting up to 12 months.

Most services in Melbourne don't expect to be tipped, although Melbourne's porters, waiters and taxi drivers are usually tipped small amounts. Most restaurants in the Melbourne area usually expect a tip of around 10%, to the nearest Australian dollar, in recognition of prompt, courteous service and good cuisine. Generally, no other public service workers in the city of Melbourne expect to be tipped.

Melbourne has a 10% goods and services tax (GST) that is applied to most items purchased in the city of Melbourne, although some fresh food produce can be exempt. If you purchase goods in Melbourne that have a combined, total value exceeding AUD 300 (from a single supplier), you can claim a full refund of the tax within 28 days. Cheque refunds are readily available at Melbourne Airport at designated booths.

Smoking in Melbourne is not generally allowed in public buildings, restaurants, outdoor areas and sporting arenas and on public transport in Melbourne. When in Melbourne, it is sensible not to smoke in enclosed spaces unless others around you are also smoking.

Much business is done over the dinner table in Australia and Melbourne is no exception. Business lunches are often held at restaurants throughout Melbourne and this is a popular way to conduct business in Melbourne. It is often advisable to book busy Melbourne restaurants in advance at peak times.