Adelaide Weather, When to Go and Climate Information 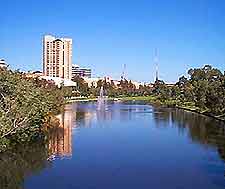 The wonderful, Mediterranean-style climate in Adelaide provides mild weather, combined with year-round sunshine. The weather in Adelaide's winter and spring months, between June to November, tends to be wetter and there is more chance of rain at this time of year in Adelaide, although sunny weather usually returns fairly quickly.

During the autumn months of March, April and May, the Adelaide climate and weather is particularly pleasant, making this a popular time to visit Adelaide. The summer months of December, January and February are generally hot, with plenty of fine, sunny weather and only occasional rainy weather. Adelaide does not have a distinct winter as such, instead it is more like a prolonged autumn over six months. 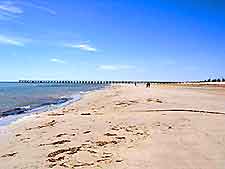 Much of the weather and climate in Adelaide is dependent upon the wind direction, with hot and dry winds from the north, and cooler more humid winds from the south. Adelaide's weather can be extremely hot during the daytime, but at night temperatures in Adelaide drop quickly and you may find it necessary to take a jacket or jumper when you are outside at nighttime in Adelaide.

The following are the normal daily temperature ranges for Adelaide: