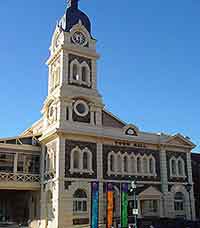 It is quite apparent that Adelaide is a city with much history and this is clearly illustrated by its numerous old buildings, various landmarks and notable monuments. Located just to the north of Victoria Square, Adelaide Town Hall is one such structure and was built in the 1860s, boasting outstanding Renaissance-style architecture with highly detailed decoration, both inside and out.

The centrally located Old Adelaide Gaol is another landmark of note and dates back to 1878, being finally decommissioned as recently as 1988. Parliament House and the Ayers Historic House both reside on the North Terrace, along with the State Library of South Australia, and all of these grand buildings add much character to this part of the city, as does the neighbouring Beehive Corner Building on King William Street.

To the south, Victoria Square is where you will find the historic Magistrates Court of South Australia, with its golden sandstone exterior dating back to the mid-19th century and adding a touch of grandeur to this area.

Address: 128 King William Street, Adelaide, South Australia (SA), 5000, Australia
Tel: +61 (0)8 8203 7590
This heritage building features a prominent clock tower and is used for functions, meetings, concerts and gala events, being able to accommodate just over 1,000 people. Hour-long guided tours are available each Monday at 10:00 and provide a real insight into the public spaces, the Civic rooms, the Queen Adelaide Room and the Colonel Light Room. Of interest, the resident organ in the auditorium was installed in 1989 and features no less than 4,500 pipes.
Open hours: Monday to Friday - 08:30 to 17:00
Admission: free 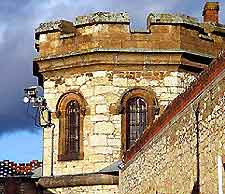 Address: 18 Gaol Road, Thebarton, South Australia (SA), 5031, Australia
Tel: +61 (0)8 8231 4062
Containing a hanging tower, an observation tower, stone carved faces and a large bell that was cast in 1857, other attractions at the Old Adelaide Gaol include an education centre and interesting honeycombed brickwork. On weekdays, self-guided tours with audio commentary tapes are available, and led guided tours are conducted each Sunday. The Old Gaol is an interesting reminder of how criminals and convicts were once treated in this area. Visitors will be able to explore the prison cells and numerous graves, before reaching the well-stocked gift shop.
Self-guided tours: Monday to Friday - 11:00 to 15:30, Saturday - by appointment only, Sunday - 11:00 to 15:30
Guided tours: Sunday - 11:00, 12:00 and 13:00
Night, ghost and group tours: by appointment only
Admission: charge, discounts available for children and families 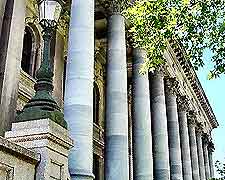 Address: North Terrace, Adelaide, South Australia (SA), 5000, Australia
Tel: +61 (0)8 8237 9100
Close to Government House, the SkyCity Casino and Her Majesty's Theatre, Parliament House is yet another grand landmark residing on the North Terrace and features magnificent architecture, a marble exterior with huge columns, a luxuriously decorated interior with many grand features and an impressive staircase. The building itself dates back to the late 19th century and offers regular guided tours.
Open hours: Monday to Friday - 09:00 to 17:00
Admission: free

Address: 288 North Terrace, Adelaide, South Australia (SA), 5000, Australia
Tel: +61 (0)8 8223 1234
The grand Ayers Historic House is an important mansion in the city and stands just across from the Royal Adelaide Hospital, down the road from the Garden of Unearthly Delights entertainment venue, where it dates back to the mid-19th century. Now owned by the National Trust of South Australia, this historic mansion was once called home by its namesake, Sir Henry Ayers, and features impressive Regency architecture, function rooms and a highly decorated interior with antique furniture, silverware, paintings, portraits and various costumes, as well as a giant chandelier. There are also attractive gardens and a restaurant.
Open hours: daily
Admission: charges vary

Address: 32 - 40 King William Street, Adelaide, South Australia (SA), 5000, Australia
Tel: +61 (0)8 8231 4062
Located on King William Street and next to the Rundle Mall is one of the city's most unusual structures, the Beehive Corner Building. This unexpected sight features striking neo-Gothic architecture and many unique features, and at more than 100 years old, its ornate architectural style, with period arched windows, certainly contrasts with the surrounding towering modern office blocks, which appear quite plain and uninspiring in comparison.
Open hours: daily - 09:00 to 17:00
Admission: free 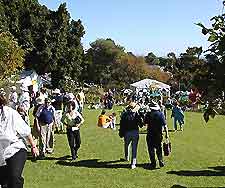 Address: Carrick Hill Drive, Springfield, South Australia (SA), 5062, Australia
Tel: +61 (0)8 8379 3886
Owned and managed by the State Government, Carrick Hill House is a large and impressive stately home, built during the 1930s and sited on the southern side of the city. This noteworthy historic landmark is home to a lavishly-decorated interior with many detailed features, which are accompanied by sizeable landscaped gardens and good views of the surrounding countryside.
Open hours: Wednesday to Sunday - 10:00 to 16:30
Admission: charge, discounts available for children, families and seniors

Address: Jetty Street, Grange, South Australia (SA), 5022, Australia
Tel: +1 300 655 276
Located on the western outskirts of the city, close to Fulham Gardens and Henley Beach, Grange House was the home of famous English pioneer Captain Charles Napier Sturt, who was responsible for many of the city's most important, historic developments during is evolution. This grand mansion is situated next to the coast and features a number of important local artefacts.
Open hours: Friday to Sunday - 13:00 to 17:00
Admission: charge

Address: 260 - 280 Victoria Square, Adelaide, South Australia (SA), 5000, Australia
Tel: +61 (0)8 8204 2444
The imposing Magistrate's Court is an important landmark in the city centre and has an eye-catching facade. There are many original features both inside and out, along with public viewing areas and a historic courtroom. The entrance is especially grand, with a portico roof supported by four large fluted columns, while the building behind is noticeably more modern and curving in its appearance.
Open hours: Monday to Friday - 09:00 to 17:00
Admission: free 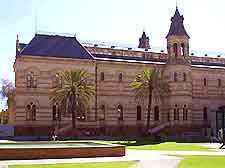 Address: North Terrace, Adelaide, South Australia (SA), 5000, Australia
Tel: +61 (0)8 8207 7200
Presiding over the North Terrace, the State Library of South Australia is home to literally millions of books, documents, maps, important city artefacts and collections, including the Donald Bradman collection of cricket memorabilia. The library began its life in the 'Mortlock Wing' in 1884 and has enjoyed considerable expansion over the years. Visitors should take time to appreciate the fine architecture of the building, which is French Renaissance in style and features a traditional four-sided 'mansard' roof.
Open hours: Monday to Wednesday, Friday - 09:30 to 20:00, Thursday - 09:30 to 17:00, Saturday and Sunday - 12:00 to 17:00
Admission: free

Address: Elder Park, King William Road, Adelaide, South Australia (SA), 5000, Australia
Tel: 1300 655 276
Torrens Lake lies on the northern side of the city centre and this large expanse of water was created in the 1880s, following the building of a large weir. Part of Elder Park, the lake has become central to many of the city's leading events, while tourists will simply enjoy the cruises, boat trips and pedalos available here. In 2009, a malfunction with the weir saw the lake almost drained completely within just two hours, which had many knock-on effects with local beaches, as well as that year's Fringe Festival. However, actions have now been put in place to ensure that this will never happen again.
Open hours: daily - 24 hours
Admission: free 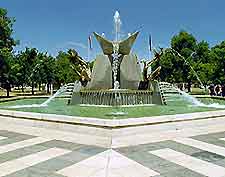 Address: King William Street, Adelaide, South Australia (SA), 5000, Australia
Tel: +1 300 655 276
Victoria Square stands in the very heart of the city, where it is bisected by Grove Street / Wakefield Street. This small public park is dedicated to Queen Victoria and comes with a grand statue of the famous monarch, along with seating areas, city views and a fountain depicting the Murray, Torrens and Onkaparinga rivers. Various important public institutions and city landmarks bound the square, such as the Federal Court, the Magistrate's Court and the Supreme Court, as well as the Treasury and the General Post Office.
Open hours: daily - 24 hours
Admission: free