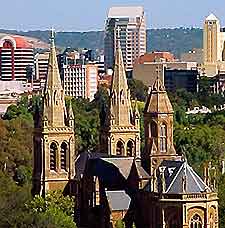 Home to an excellent travel network, including ports, harbours and Adelaide Airport - the fourth largest domestic airport and the sixth largest international airport in Australia, Adelaide is an important transport hub. With good connections throughout South Australia, which contribute greatly to Adelaide's wealth and popularity, the city of Adelaide has many outstanding business facilities. These meeting rooms and exceptional conference facilities are concentrated in central Adelaide and feature state-of-the art video communication technology. 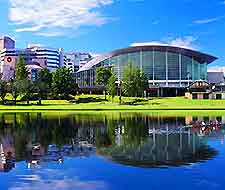 Some of Adelaide's most successful businesses include manufacturing, with numerous large warehouses situated on the outskirts of Adelaide. A combination of tourism and leisure, retail and shopping, hospitality and the vast campus of Adelaide University, all contribute to Adelaide's thriving economy. As a result, Adelaide has a superb selection of world-class shopping centres, centred around Rundle Mall. The particularly buoyant hotel industry in Adelaide also reflects the high number of tourists travelling to Adelaide and central Adelaide features all kinds of hotels and accommodation options, ranging from budget lodging in Adelaide hostels to sumptuous five-star, luxury hotels.

Offices and businesses in Adelaide and South Australia are generally open on weekdays between 09:00 and 17:30, and most banks in Adelaide open between 09:30 and 16:30 from Monday to Thursday, staying open until around 17:00 on Friday. Adelaide's largest banking branches also have extended opening hours, usually from 08:00 to 18:00 during the week.

There are many ATM cashpoint machines located all around the city of Adelaide, proving one of the most useful and convenient ways to exchange currency. Shops, restaurants and hotels in Adelaide happily accept major credit cards, such as American Express, MasterCard and Visa.

A firm handshake is the usual customary greeting in Adelaide, South Australia and generally throughout Australia. It is also generally acceptable to use first name terms when addressing new acquaintances in Adelaide and most businessmen and women in the Adelaide area are usually very friendly and extremely polite.

Restaurants and cafés in Adelaide now have a particularly strict 'no smoking' policy, although some may cater for smokers in different places, such as outside seating areas. Adelaide's offices and businesses are all 'non-smoking' and many locals in Adelaide are strongly opposed to smoking, so it is always sensible to check with those nearby before you start smoking in Adelaide.