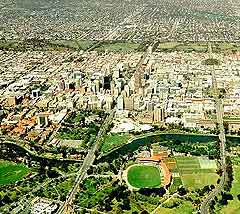 The South Australian capital of Adelaide boasts a population topping one million and is a hugely popular coastal city. Many suburbs surround the city, stretching for approximately 20 km / 12 miles and connecting the coastline with the foothills.

Adelaide serves as a significant employer, with the service industry and the retail trade in particular contributing greatly to the city's economy. Prominent businesses calling the city their home include the famous Coopers Brewery at Regency park, the Australian oil and gas giant of Santos, and Argo Investments Limited, which was founded here in 1946 and regularly trades on the Australian Stock Exchange.

Further education is well catered for in the city, at both the University of Adelaide and the Flinders University of South Australia, founded in 1874 and 1966 respectively, where almost 45,000 students are based.

There is a large selection of tourism offices in the vicinity of the city - the principal outlets are listed below.

Adelaide Hills Visitor Information Centre
Address: 41 Main Street / Mount Barker Road, Hahndorf, South Australia (SA), 5245, Australia
Tel: +61 (0)8 8388 1185
Located in the scenic Hahndorf area, the Adelaide Hills Visitor Information Centre is filled with info about the region's large concentration of vineyards, wineries and breweries. There are also more than a handful of brochures, maps and details relating to the numerous national parks and nature trails in this area.
Open hours: Monday to Friday - 09:00 to 16:00, Saturday and Sunday - 10:00 to 16:00

City of Adelaide Customer Centre
Address: 25 Pirie Street, Adelaide, South Australia (SA), 5000, Australia
Tel: +61 (0)8 8203 7203
The City of Adelaide Customer Centre is to be found next to the Town Hall and near Victoria Square. This outlet supplies the latest festival and event details, including sporting events, theatre booking and local concerts.
Open hours: Monday to Friday - 08:30 to 17:30 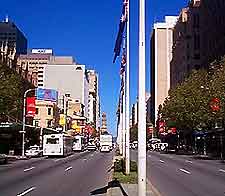 Passenger Transport Information Centre
Address: Currie Street, Adelaide, South Australia (SA), 5000, Australia
Tel: +61 (0)8 8210 1000
The Passenger Transport Information Centre can be found next to Light Square and the Adelaide College of the Arts, where it is full of details relating to the local public transport system. Information available includes bus routes, train times and tickets.
Open hours: Monday to Saturday - 08:00 to 18:00, Sunday - 10:30 to 17:30

When travelling around the city of Adelaide, as with any large city, it is a good idea to maintain an awareness of your surroundings and not look like a tourist. Be discreet with money and valuables, and be sure not to leave handbags, cameras and mobile phones unattended. 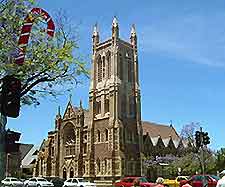 South Australia's premier city is home to a number of different cultures and religious beliefs, and many locals in Adelaide are at least nominally Christian in their belief, although this majority has reduced in recent years. Most Protestant churches here have merged to form the Uniting Church, while the Anglican Church of Australia remains a separate entity. Adelaide has two cathedrals, St. Peter's Cathedral, which is an Anglican church, and St. Xavier's Cathedral, a large Roman Catholic church.

Most pharmacies and chemists in and around Adelaide city centre open between 08:00 and 20:00 or later. Pharmacies are run by qualified professionals who dispense prescribed medication, sell a selection of medicines and also offer basic medical advice. Visitors are allowed to bring three months' worth of prescription medication into the country, although it is a good idea to also carry a doctor's certificate to avoid any possible problems at customs.

English is the most commonly spoken language in Australia as a whole, although many other nationalities and ethnic cultures are well represented in Adelaide. Whilst Australian 'Aussie' accents may be strong, with local dialects and phrases, they are usually easy to understand. Expect to here 'fair dinkum' from the locals, which simply means 'yes, that's true'.

All visitors to Adelaide, South Australia and any other areas of Australia will require a visa. Application forms are available from either Australian diplomatic missions overseas or travel agents, where you can either apply in person or by mail. Many travel agents and airlines now also grant on-the-spot Australian visas for up to three months, using the Electronic Travel Authority system (ETA).

New Zealand is the only country not requiring these travel visas, although New Zealanders receive a 'special category' visa upon arrival in Adelaide.

There are a number of strict regulations allowing overseas visitors to work in the city of Adelaide, issued by the Department of Immigration and Multicultural Affairs (DIMA). Visitors to Australia aged between 18 and 30 from the United Kingdom, the Republic of Ireland, Canada, South Korea, Germany, the Netherlands, Japan and Malta may be eligible for a Working Holiday Visa, lasting up to 12 months.

Most services in Adelaide city do not generally expect tips, although it is usual to tip many of the hotel porters, restaurant waiters and taxi drivers a small amount. Restaurants will expect a tip of around 10%, to the nearest Australian dollar, for of prompt, courteous service and a decent meal.

South Australia has a 10% goods and services tax (GST) that is applied to most items purchased in the city, although fresh food produce may be exempt. If you purchase goods in Adelaide that have a total value of more than AUD 300 from a single supplier, you can claim a full refund of the tax within 28 days. Cheque refunds are available at the airport, in special designated areas.

Smoking in Adelaide is not permitted in public buildings, restaurants, outdoor areas, sporting arenas and also on Australian public transport. When in the city, it is a good idea not to smoke in enclosed spaces unless others around you are also smoking. Many locals in South Australia are strongly anti-smoking, meaning that it is worth asking first before actually lighting up.