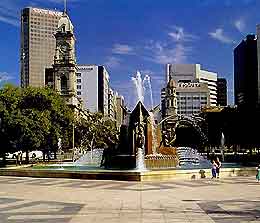 There are all kinds of attractions spread around South Australia and many of the most popular await visitors in the city of Adelaide. When you first arrive here you may well like to acquaint yourself with the layout of the city, by joining a guided walking tour, a coach tour or a cruise on the Torrens River.

Situated in the Port Adelaide district and just down the road from the Hindmarsh Stadium, the Adelaide Entertainment Centre is a vast indoor arena, hosting many of the city's premier events and concerts. Further attractions include the SkyCity Casino, the Opal Field Gems Mine and Port Noarlunga, as well as the seaside suburb of Semaphore, which comes with golden beaches, a theme park, a steam railway and an inviting oceanfront promenade named the Semaphore Jetty. This scenic esplanade dates back to 1860 and has witnessed many violent coastal storms over the years. If you are here on Australia Day (26th January) or New Year's Eve, then you will likely witness large crowds and lively celebrations on the beach. 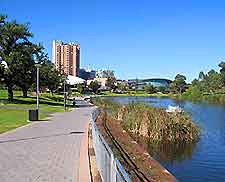 Address: Adelaide, South Australia (SA), 5000, Australia
Walking tours around central Adelaide are widely available and are operated by several different tour guides. These provide a real insight into many of the city's top attractions and historic buildings, such as Adelaide Town Hall, Parliament House and other important sights, lasting around two hours in total. Guided walking tours are always led by knowledgeable guides, some of which are multilingual, with details about possible tours, destinations and departure points being available from hotels and local tourist offices.
Open hours: daily - hours vary
Admission: charge, discounts usually available for children and seniors

Address: Adelaide, South Australia (SA), 5000, Australia
The city's situation in South Australia, near to numerous vineyards and wineries, and surrounded by appealing towns, has attracted a selection of leading tour operators. Offering a range of guided coach tours to a variety of different neighbouring locations, such as the Adelaide Hills, the Barossa Valley and the Fleurieu Peninsula, the latest current information about local guided coach tours is always available at the numerous tourist outlets in the city.
Open hours: daily - hours vary
Admission: charge, discounts available for seniors, children and groups

Address: Adelaide, South Australia (SA), 5000, Australia
Cruises provide an especially pleasant way to tour the region. Departing from several different places along the Torrens River, Fisherman's Wharf, Queen's Wharf and other locations around the Port Adelaide area, cruises vary in length and the most popular tend to feature entertaining commentary and basic refreshments. There are also some cruises available at nearby Goolwa and Victor Harbour, where whale watching boat trips operate between the months of June and early November.
Open hours: daily - hours vary
Admission: charge, discounts available for seniors, children and groups

Address: Port Road, Hindmarsh, South Australia (SA), 5007, Australia
Tel: +61 (0)8 8208 2222
This complex opened in 1991 and was expanded between 2007 and 2010 at the cost of more than AU$50 million, meaning that it can now seat approximately 12,000 people. Regular concerts and operas are staged here, taking full advantage of the exceptional acoustics, while the centre also hosts theatrical performances, ballets and a number of sporting events, such as World Wrestling Entertainment shows.
Open hours: hours vary
Admission: charge 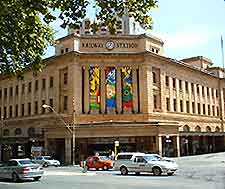 Address: North Terrace, Adelaide, South Australia (SA), 5001, Australia
Tel: +61 (0)8 8212 2811
Opened in 1985, Adelaide Casino is located on the northern side of the city centre, within the old Railway Station building and close to Her Majesty's Theatre, Parliament House and the Convention Centre. Owned by the SkyCity Entertainment Group, this casino currently holds the only table gaming license in the whole of South Australia. Featuring excellent gambling facilities, such as almost 100 roulette tables and blackjack areas, and around 1,000 video games and fruit machines, SkyCity also boasts highly regarded restaurants and numerous exciting events.
Open hours: Sunday to Thursday - 10:00 to 16:00, Friday and Saturday - 10:00 to 18:00
Admission: free

Address: Esplanade, Semaphore, Adelaide, South Australia (SA), 5019, Australia
Tel: +61 (0)8 8447 4788
Lying to the north-west and just past Rosewater, between the Signal Station Reserve and the Wonga Park Reserve, the coastal location of Semaphore has become a popular tourist attraction in its own right. This exciting seaside resort has much more to offer than just golden sandy beaches, such as its large theme park with fast rides and water slides, steam train rides at the Fort Glanville Conservation Park, exceptional fishing, walking trails along the shoreline, shops, eateries, bars and of course, some awesome views. A stroll along the historic Semaphore Jetty will be in order, while the World War I Memorial Clock is a notable local sight.
Open hours: daily - 24 hours
Admission: charge for some attractions

Address: Kensington Road, Kensington Park, South Australia (SA), 5068, Australia
Tel: +61 (0)8 8332 7712
Originally named the Princess Theatre, the Chelsea Cinema lies on the far eastern side of Adelaide, next to the suburb of Marryatville and close to the Kensington Oval, where it is housed in a historic Art Deco building dating back to the 1920s. With the latest films, combined with state-of-the-art cinema technology and a real feel of the past, the cinema is a good place to come on a rainy day.
Open hours: daily - 10:00 to 23:30
Admission: charge, discounts available for children

Address: Heysen Road, Hahndorf, Adelaide, South Australia (SA), 5245, Australia
Tel: +61 (0)8 8388 7277
The Cedars, home of the late famous 20th-century artist Sir Hans Heysen (1877 to 1968), is situated in the scenic Adelaide Hills. Highlights include many of Heysen's original paintings and sketches, his actual studio, guided tours, landscaped gardens and a gift shop. A pleasant walking trail leads visitors to some of the artist's favourite spots within the extensive grounds, while the studio of his daughter, Nora Heysen, adds further interest and features changing exhibitions.
Open hours: Sunday to Friday - 10:00 to 16:00
Admission: charge, discounts available for children

Address: 30 Gawler Place, Adelaide, South Australia (SA), 5000, Australia
Tel: +61 (0)8 8223 4023
The centrally located Opal Mine sells a variety of locally mined opals, in various sizes, rich colours and all of outstanding quality. There are short films explaining all about the mining process, together with some interesting examples of traditional Aboriginal art and decorated didgeridoos. Although staff will be happy to arrange postage for large purchases at the gift shop, many of the items are extremely delicate and there is no guarantee that they will arrive in one piece, so do bear that in mind before parting with your holiday cash.
Open hours: Monday to Thursday - 09:00 to 17:30, Friday - 09:00 to 19:00, Saturday - 10:00 to 17:00
Admission: free

Address: Port Noarlunga, Adelaide, South Australia (SA), 5167, Australia
Tel: +61 (0)8 8323 9944
Situated in the Glenelg district and roughly 30 km / 19 miles to the south of Adelaide, Port Noarlunga is a charming and picturesque seaside suburb within easy reach of the city centre. Home to a small population of just over 2,500 residents, attractions here include coastal walking trails, street cafés and bars, old historic buildings and a real sense of heritage, as well as scuba diving expeditions to the Port Noarlunga Reef and the Onkaparinga Estuary Aquatic Reserve. The beach itself is extremely long and is known for its favourable surfing conditions.
Open hours: daily - 24 hours
Admission: free 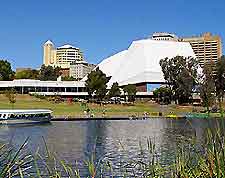 Adelaide has a number of excellent theatres that regularly host theatrical productions, dramas, comedies, concerts, operas, workshops and exhibitions. These include: