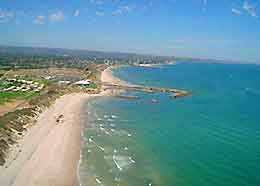 Adelaide, the capital city of South Australia (SA), was founded in 1836 by free settlers and is now one of the most historic cities in the whole of Australia. The city of Adelaide is located on a coastal plain between the Gulf of St. Vincent and the Adelaide Hills, with much of the city being divided by the beautiful Torrens River.

Despite its size, Adelaide often has a feeling of a large town, and this leafy city boasts a distinctly European vibe. The city centre itself comprises a series of squares, connected by King William Street, where the South Australian Tourism Commission Visitors Centre is to be found - the city's principal tourist information outlet. Victoria Square is especially prominent and stands alongside Franklin Street. Nearby is the Rundle Mall and its extensive array of department stores. 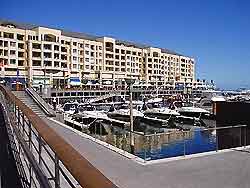 The Adelaide area of South Australia is home to exceptional, clean and sandy beaches, many of which are close to the city centre, particularly around the Glenelg area, such as Aldinga Beach, Maslin Beach and Moana Beach. These lengthy stretches of golden sand are the perfect place to relax, sunbathe, swim or snorkel, and many of Adelaide's beaches often feature strong waves, making them highly suitable for surfing.

Adelaide is actually a relatively compact city and easy to find your way around. If you choose to stay outside of the Central Business District (CBD), consider looking for hotels in the North Adelaide area, which is connected by regular buses and only a matter of minutes away. The beach suburb of Glenelg is another reliable place to look for holiday accommodation, with the months of December and January being especially busy. 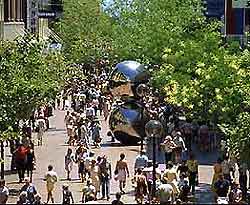 Historic tourist attractions for visitors include Adelaide Town Hall - built in the 1860s with magnificent Renaissance-style architecture; Parliament House - featuring outstanding architecture and a marble exterior; the Old Adelaide Gaol - founded in 1878 and finally decommissioned in 1988; the Magistrates Court - a landmark building in the city centre with an eye-catching, golden sandstone exterior; the State Library of South Australia - home to literally millions of books, documents, maps and important local artefacts; Ayers Historic House - an outstanding mansion built in the mid-19th century; Torrens Lake - a vast lake close to many of the most prominent landmarks, with regular cruises; Victoria Square - a large pedestrianised central square dedicated to Queen Victoria; Adelaide University - founded in 1874, the oldest university in South Australia and the third-oldest in Australia; St. Peter's Cathedral - on the northern side of the city, built between 1869 and 1901; and St. Francis Xavier Cathedral - an impressive Roman Catholic cathedral dating back to mid-19th century. 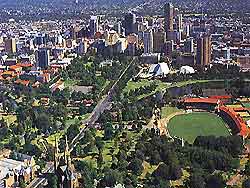 Other popular attractions for tourists visiting Adelaide and South Australia area include seasonal whale watching tours - operated between mid-June to early November from the southern coastal beaches of Kings Head to Goolwa beach, Encounter Bay, Port Lincoln and Victor Harbour; the Adelaide Entertainment Centre - a vast complex, hosting many of the city's premier events and concerts; the SkyCity Casino - an enormous casino centre with exceptional gambling facilities; Adelaide Zoological Gardens - one of the oldest zoos in Australia, with around 1,500 animals from all over the world; Cleland Wildlife Park - housing many friendly native Australian animals, such as kangaroos, wallabies, emus and koalas; the Magic Mountain - an exciting fairground with many fast rides and carousels; the Parklands - a green oasis in the centre, providing an important, central recreation area, with playing fields and secluded picnic spots; and the city's Botanic Gardens - with a number of landscaped gardens, important collections of exotic plants from around the world, a spectacular Victorian palm house and a striking contemporary glasshouse known as the 'Bicentennial Conservatory'. More information about Adelaide Tourist Attractions and Adelaide Landmarks.

Adelaide also has a number of excellent museums and cultural attractions, providing absorbing information on the history of the city and South Australia in general. Some of the most visited include the South Australian Museum - an enormous museum with many important heritage items from this part of Australia, including a vast collection of Aboriginal finds; the Migration Museum - specialising in the history of more than 100 different nationalities who have migrated here over the years; the South Australian Maritime Museum - full of nautical memorabilia, with interesting exhibitions about the arrival of early immigrants by sea; the Oval Museum - home to an interesting cricket exhibition, celebrating the city's rich cricketing history and famous Adelaide Oval cricket stadium; the Art Gallery of South Australia - one of the largest art galleries in the entire country, housing many old masters; and Arts SA - in the centre, hosting many art exhibitions by local artists. More information about Adelaide Museums and Adelaide Art Galleries.

Nearby Adelaide there are a huge number of day trip and excursion possibilities, such as the Hills, Eyre Peninsula, Fleurieu Peninsula, Flinders Ranges, Kangaroo Island, Mid-North, Southeast / Limestone Coast, Yorke Peninsula and the Outback region close by, home to William Creek - famous for being the smallest town in Australia, with a population of less than 20 people.

Adelaide is one of South Australia's most famous wine-producing areas and contains a wealth of wineries and vineyards, covering many thousands of hectares. The majority of the most prestigious vineyards are located in the Barossa Valley, McLaren Vale, Fleurieu Peninsula, Encounter Bay, Mount Lofty Ranges, Mount Benson, Clare Valley and the Yorke Peninsula.

The capital city of South Australia, is a vast and spreading place, although manages to retain the charm and character of a large country town. With a friendly atmosphere, alfresco dining with stunning views, and an extremely lively nightlife, Adelaide features dry, hot summers and plenty of sunny weather. The free and easy lifestyle, relaxed atmosphere and friendly locals combine to make Adelaide an understandably popular location in Australia.