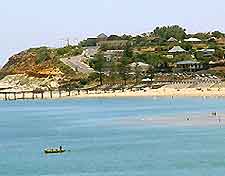 Established in the middle of the 1830s to serve as the capital for a settled British province, Adelaide is very much a planned city. It has a sizeable urban layout comprising various districts and suburbs, often divided by the Torrens River. The central neighbourhoods tend to be organised in a grid, with the centre of the city comprising a series of five squares, which are surrounded by a number of public parks named the 'Adelaide Parklands', such as Victoria Park and its popular racecourse.

The city has rather outgrown its original ambitious plan, with various districts now located outside of the parklands, along with two busy ring roads. Lying to the north, the suburb of Elizabeth is often referred to as a satellite town and arrived in 1955, while the easterly neighbourhood of Norwood was established roughly a century earlier, growing up around its thoroughfare known as 'The Parade'.

The seaside suburb of Glenelg resides on the western coast and alongside the Gult St. Vincent's Holdfast Bay, where it is the same age as Adelaide itself and currently functions as a major tourism hotspot. Moseley Square contains a number of Glenelg's most historical attractions, such as the Town Hall, the Stamford Grand Hotel and the Jetty. This is also where the Glenelg Jazz Festival is staged each year in October.

The city centre district includes the compact Central Business District (CBD) and is an organised gridwork of roads, dominated by a number of imposing buildings. Central Adelaide is an interesting mixture of historic Victorian buildings and contemporary architecture. Some of the main attractions here include the North Terrace, which is home to a number of luxury hotels, the SkyCity Casino complex, the grand Parliament House and the city's magnificent Botanic Garden. 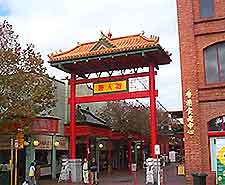 Nearby Rundle Mall features some of the city's best shopping, with outstanding shopping centres and large department stores. Victoria Square lies in the heart of the city centre, close to the Central Bus Station.

Other important areas in central Adelaide include the small Chinatown district between Grote Street and Gouger Street, Hindley Street, where you will find some of the most lively nightlife in the city, and King William Street, home of the grand Town Hall.

The North Adelaide district contains many of the city's best restaurants, wine bars and public houses, which are particularly concentrated around O'Connell Street. This part of the city also boasts a thriving street café culture, with numerous 'alfresco' dining areas and some interesting speciality shops. 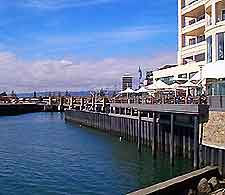 Glenelg is within easy reach of the city centre and there are regular daily trams that provide inexpensive travel to and from Glenelg. Other attractions here include a visitors' centre and the Old Gum Tree on MacFarlane Street, where the proclamation of South Australia was famously read in 1836.

The Norwood district is situated on the eastern side of Adelaide and is a popular location for sightseers, with some outstanding restaurants, cafés and excellent shops along the Parade, which serves as one of Norwood's main attractions. Every March, Norwood hosts a major wine and food day, and this attracts large crowds from all over the city and other areas of South Australia. 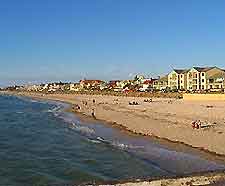 The Port Adelaide district is rich in heritage, with Victorian buildings, large warehouses and many well-preserved 19th-century public houses. Close to Port Misery, this lively neighbourhood was a substantial shipping area in the late 19th century and is still a working port today. Bounded by Nelson Street, St. Vincent Street and Todd Street, Port Adelaide is situated to the north-west of the city centre and is called home by the South Australian Maritime Museum, the Port Dock Station Railway Museum and the nearby Semaphone region, on the eastern coast.

Other highlights include local shops, offshore fishing and regular cruises along the Port Adelaide River, where friendly dolphins can often be seen swimming and jumping.