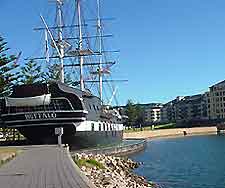 Adelaide has around 750 restaurants and similar dining options, both in and around the centre. The city of Adelaide's reputation for dining out has increased greatly over the past ten years and many new restaurants have opened up throughout the city and within nearby areas of South Australia.

Many of the eateries in Adelaide have won impressive awards and accolades, and the city's plentiful dining establishments are without doubt some of the best in South Australia. It is widely reputed that this city has more restaurants per head than anywhere else in the whole of Australia.


Restaurants in Adelaide are incredibly cheap in comparison to other major cities in Australia and there is an extremely diverse selection located here. Serving many different types of cuisine from all over the world, local eateries often have outside 'alfresco' seating areas, with scenic views. One of the most unusual dining options is the Buffalo Boat in the Glenelg district, which is a large wooden sailing boat featuring a popular restaurant inside. 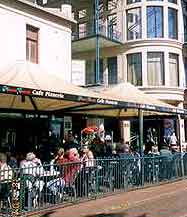 For some of the most authentic and colourful Chinese and Cantonese food in Adelaide, look no further than the city's impressive Chinatown district, in the lively multicultural area of Moonta, where you will find large numbers of Chinese, Vietnamese, Japanese and Korean restaurants. Moonta street is closed to traffic and can be found between Gouger Street and Grote Street. The majority of restaurants in Adelaide take reservations and it is often sensible to book your dining space in advance. 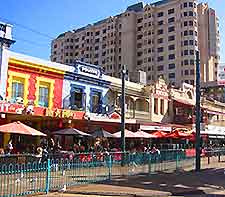 Restaurants and cafés in Adelaide and South Australia generally open every day of the week, with many serving food from 07:00 to 22:00 or later, although some of the city's may close on Sunday and Monday nights. Most eateries open for lunch and dinner, while the numerous street cafés, friendly coffee shops and central hotels are the most popular locations for breakfast.

Outside a number of Adelaide's restaurants you will find the letters 'B.Y.O.' or 'B.Y.O. Only', which indicates that the venue allows you to bring your own beverage. Dining establishments in South Australia require a licence to sell alcohol, but are allowed to serve it if you bring it with you.

Wine lists in most of local restaurants consist of mainly local Australian and South Australian wines, which is hardly surprising in Adelaide, with so many world-class vineyards nearby. Some of the most popular choices include rich wines from vineyards located in the Barossa Valley, McLaren Vale, Fleurieu Peninsula, Encounter Bay, Mount Lofty Ranges, Mount Benson, Clare Valley, the Yorke Peninsula and the scenic Adelaide Hills region. Larger restaurants may also serve wine from other countries, together with a number of the city's more specialist, themed options.

Breakfast in Adelaide has become an enjoyable and extremely social event. Starting at around 06:00, breakfast is generally served until 11:00, although a number of restaurants, cafés and eateries do serve all-day-breakfasts, particularly at weekends.

Lunchtime in the Adelaide and South Australia ranges from a gourmet buffet lunch in a fashionable restaurant or wine bar in the city's Central Business District (CBD), to a freshly-made sandwich, or 'sanger', available at one of the many inexpensive sandwich shops. Most lunch is usually eaten between 12:00 to 14:00, with burger bars, sandwich shops and takeaways providing additional choice.

Many locals and visitors regularly choose to dine out for dinner, sampling the cuisine of Adelaide's superb restaurants. Dinner is generally eaten between 18:00 to 22:00. Evening dining choices range from inexpensive bar snacks to outstanding, luxurious meals, in gourmet haunts.