Getting Around, Adelaide Travel, Transport and Car Rental 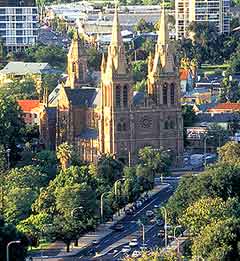 Adelaide is well served by its public transport system and is home to an excellent network of buses, trains, trams and ferries. Public transport provides reliable connections throughout South Australia and the city is located near to many other interesting locations, suitable for excursions. Many visitors also travel into the city's suburbs, such as the Adelaide Hills, the Barossa Valley, Fleurieu Peninsula and the mountainous Flinders Ranges.

The public transportation system is an ideal way to travel around Adelaide. Buses, ferries and trains are all extremely fast and inexpensive and connect most popular tourist attractions, as well as neighbouring Aberfoyle Park, Murray Bridge, North Haven and Victor Harbour.


Adelaide has plenty of parking spaces and finding places to park your car is not difficult, with many large garages located within the busy Central Business District (CBD). Tourists often head outside of the city and renting a car is the most popular way to travel further afield, with the A1 heading in both a northerly and south-easterly direction, connecting Buckland Park and Mount Barker respectively.

The city is served by Adelaide Airport (ADL), the largest airport in South Australia, the fourth-largest domestic airport in the county and also the sixth-largest international airport.

Renting a car can be an economical and useful way to travel around South Australia, with many firms offering discounts for car rentals of three days or more. Major car rental companies in the city include Alamo, Avis, Budget, Hertz, National and Thrifty Car Rental. 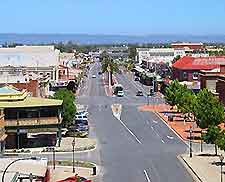 Further buses are available and travel to many suburban districts. These buses are operated by TransAdelaide (TA) and free timetables can be picked up in the TransAdelaide Information Bureau on the corner of King William Street and Currie Street. Bus tickets can be used on buses, trains and the tram, with day-trip tickets offering the best value for money.

A number of ferries are available in Adelaide, regularly travelling from the mainland to nearby locations, including Kangaroo Island, as well as providing many ferry cruise options. 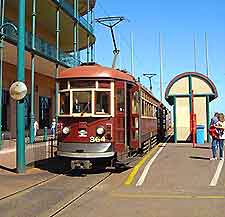 Adelaide features a scenic, historic tram route, which is a popular option for those travelling around the central core. Trams link the city centre with the coastal district of Glenelg. Worth noting, the tram station is situated on Victoria Square.

The main train station is to be found on the central North Terrace, close to the SkyCity Casino complex. Operated by the city's TransAdelaide transport authority, trains are a fast way to reach Port Adelaide, many suburbs and other areas of South Australia.

With more than 80 train stations throughout the area, the TransAdelaide rail network has regular trains throughout the week, with a more limited service at the weekends. Adelaide's train network has five lines which travel across the metropolitan area - Belair, Gawler, Grange, Outer Harbor and Noarlunga.

Taxis in Adelaide are one of the most convenient ways to travel short distance. Most can be hailed on the road or picked up from the taxi ranks on King William Street, outside of the SkyCity Casino and at other prominent locations around the centre.

Taxis in Adelaide are usually fairly inexpensive and in quieter areas of the city, cabs can be ordered by phone - just ask your hotel for their recommendation.

Adelaide is very flat and there are many wide roads and separate cycle lanes throughout the city, making cycling an extremely pleasant way to get around. The Torrens Linear Park track is one of the best cycling routes, where you can ride from the coastal area of West Beach to the hills at Athelston.