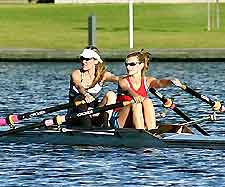 All through the year, a variety of different sports regularly take place around Adelaide, often with strong Australian themes. Surfing is a major pastime with locals and some of the strongest waves are known to attract the very best surfers on the planet.

Australian Rules Football is an especially popular spectator sport in the city, with the Adelaide United Football Club regularly playing in the A-League. Hindmarsh Stadium serves as the team's home ground and this venue dates back to 1960, being capable of accommodating some 17,000 spectators. Standing on Turner Drive, Football Park is a further notable stadium and features a seated capacity of more than 50,000. The Adelaide Oval is yet another leading sports ground in the city, being called home by the South Australia Cricket Team (Southern Redbacks), the Adelaide Strikers and the South Australian Cricket Association. 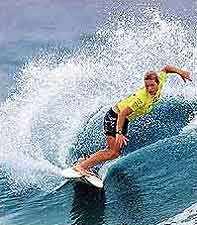 South Australia is home to many superb beaches, such as Myponga Beach, Parsons Beach and West Beach. With excellent waves, Adelaide is one of the most popular locations in South Australia for surfing, particularly during the winter months. Nearby Boomer Beach in Port Elliot and areas of Victor Harbour both feature world-class surfing conditions, suitable for only the most experienced surfers.

The city has some impressive diving locations, including splendid reefs and clear waters off Aldinga Beach, Moana Beach and also around Port Willunga, where there is large cargo ship wreckage. There are a number of dive centres along the coast, particularly around the suburbs of Aldinga, Christies Beach and Glenelg. 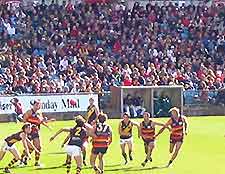 There are numerous public tennis courts situated within the larger parks and sports centres, and also at the East Torrens Kensington Gardens Tennis Club on South Terrace. The annual AAPT Tennis Championships are held in late December / early January each year at the Memorial Drive Tennis Club, which resides on the southern side of Pennington Gardens and next to Pinky Flat, on the War Memorial Drive. 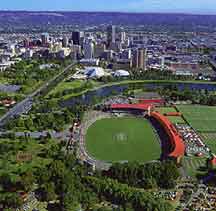 Interstate cricket matches, international test matches and one-day cricket matches are held throughout the summer at the Adelaide Oval, on the War Memorial Drive. Reputed to be one of the most magnificent cricket stadiums in existence, the Oval is also used for rugby league and Australian Rules Football matches. The Australian cricket season runs from October until March.

Horse racing is a popular local sport and the main racecourses in the city include the Anzac Highway Racecourse, which is home to the prestigious annual Adelaide Cup race each March. Victoria Park is another notable equestrian venue, being where the International Horse Trials take place each November.

Visitors, tourists and locals in Adelaide all share a love of water sports and the city is home to many excellent public swimming pools. Some of the city's pools are set within beaches and many of the outdoor pools are closed at the beginning of May, opening again in October.

Yachting has long been a popular pastime for locals and when the weekend arrives, many yachts sail around the region's picturesque harbours and bays. The yachting season is generally from October to April, with a number of exciting yachting events held locally each year.

There are numerous sailing, canoeing and kayaking schools in the Adelaide area, suiting experienced and novice sailors alike, and often being located around the Port River. With a variety of introductory lessons, sailing is an extremely enjoyable way to explore the Port River. Of note, a number of well-supported annual sailing competitions are held here between October and March.

There are several large tenpin bowling alleys in the city, often being a part of leisure complexes. Admission depends upon the day and time, and it is often cheaper to bowl before 18:00 on weekdays. The main bowling centre is the AMF Tenpin Bowling Club on Port Road, which is to be found within the Woodville district and close to the St. Clair Oval.

Adelaide has countless scenic cycling trails throughout the city, a number of which are particularly suitable for mountain bikes. Many of these cycleways can be found in the suburbs and often come with spectacular views of the surrounding scrublands and coastal areas.

Adelaide features some thrilling extreme sports and outdoor activities, such as mountaineering, abseiling, skydiving, jet skiing, bungee jumping, white water rafting and speed racing. Many of these activities are available on the outskirts of the city and within other nearby areas of South Australia.