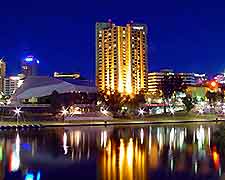 Adelaide is a simple city to find your way around and if you choose accommodation outside of the Central Business District (CBD), good public transport connections ensure that you are never far from the action. Hotels within North Adelaide are generally no more than a five-minute bus journey from the city centre, while lodging in the appealing beach suburbs is a little further away, being around 30 minutes from downtown by either bus or tram.

Glenelg is a particularly popular beach suburb of Adelaide and contains a plethora of beachside accommodation options, which range from modern hotels to self-contained holiday apartments. December and January are especially busy months and form the early part of the Australian summer. Many of the hotels and guest houses are also often filled to capacity during the annual Arts Festival celebrations, which take place at the end of February and run into early March. 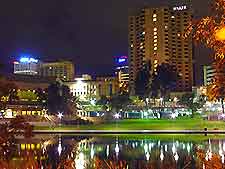 Cheap motels are widespread in Adelaide, although there are some areas where they are particularly clustered. One such stretch is Glen Osmond Road, which can be found leading into the heart of the city from the south-east. Heading towards the coastal suburb of Glenelg, the Anzac Highway is also lined by an array of cheap motels and similar accommodation.

One of the most popular and convenient lodging areas in Adelaide is along King William Street, which features many mid-range hotels right next to the city centre. The majority of the city's four- and five-star accommodation is located in or close to the city centre, and along the North Terrace, where the Hyatt Regency Adelaide Hotel comes highly recommended.