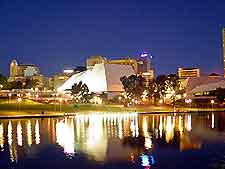 The arts scene in Adelaide has flourished ever since the sixties and a number of annual events were established at this time. These include two of the city's biggest and most well-supported events, namely the Fringe and the Adelaide Festival of Arts, the latter of which is staged every other year and incorporates Writer's Week.

Constructed in the early 1970s, the Adelaide Festival Centre immediately became the earliest multi-purpose arts centre to be built in Australia. Located alongside King William Street, the North Terrace and Elder Park, the centre offers a regular choice of things to do and see, being easy to spot with its distinctive trio of white domes.

Other significant highlights in the annual events calendar include the city's Marathon in August, the Royal Adelaide Show in September, the Glenelg Jazz Festival in October, and the Mitsubishi Horse Trials in November. The end of December sees the annual New Year's Eve celebrations staged in Elder Park, with two extravagant fireworks displays with musical accompaniments at 21:00 and midnight.