Getting Around, Hiroshima Travel, Transport and Car Rental 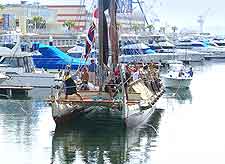 Visitors travelling from Europe or North America will have to fly to the international airport at either Tokyo or Osaka first, and then connect by rail or air with Hiroshima. The city stands along a main rail line, linking Hiroshima with both Tokyo and Osaka. Therefore, travel in and out of the city is easy, and a range of additional public transport is on offer here.

The airport consists of one terminal with three floors. Floor 1 contains the Arrivals Lobby and an information counter, Floor 2 is home to the Departures Lobby and ticket counters, while Floor 3 boasts an observation deck. Additional facilities at Hiroshima Airport include toilets, telephones, a conference room, coin lockers, a post office, baggage storage currency exchange and a nursery. There are also outlets where passengers can dine and purchase snacks and beverages.

Transfers to the city of Hiroshima can be made by limousine service, electric railway, bus transport or taxis. Buses are the cheapest way to travel, while shared taxis can also work out to be economical. Buses normally travel every 45 minutes from 06:00 until 21:00 and tickets can be purchased from ticket vending machines. Electric trains travel more frequently, approximately every 10 minutes, but are marginally more expensive. Trains are in operation between 08:30 and 22:30. Taxi stands and bus stops are situated outside the terminal building on Floor 1.

Scenic flights in a Cessna or helicopter transport around Hiroshima are also available, allowing you to see the city from a different perspective. Flights depart from Hiroshima West Airport and a minimum of two passengers is normally required to charter a flight. Flight duration is typically between 15 and 20 minutes, and can be booked through First Flying (tel: +81 082 233 3123) and Japan Regional Airlines (tel: +81 082 295 2111). 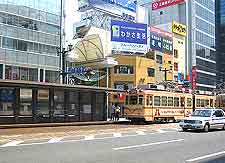 Hiroshima can be easily accessed by car, with three excellent expressways providing access to the Hiroshima Prefecture - Nishi-Seto, Seto Chuo and Kobe Awaji Naruto. These expressways have some impressive suspension bridges that are worth visiting in their own right. Off the main routes into the city, drivers may find signage difficult to decipher, but should have no problems when travelling to the city via a major route. Cars can be rented at the airport or within the city of Hiroshima itself, and although expensive, a rental car will provide you with unbeatable comfort and the freedom to travel around the areas surrounding the city at your leisure.

Hiroshima Port is the second most visited by cruise ships in the country, making it a popular stop off for those who choose to travel by boat. Often, cruise ships only dock for one day, with passengers disembarking to visit the city's World Heritage sites before setting sail again in the evening.

Also known as the 'Water City', one of the best ways to see Hiroshima is to cruise along the river through the city centre, or alternatively, take advantage of the ferry transport around Seto Inland Sea, where there are a number of islands. Cruises typically depart from the foot of Motoyasu-bashi Bridge, south of the A-Bomb Dome, and operate throughout the day and into the evening. 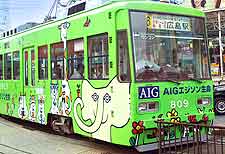 Hiroshima Travel by Bus and Coach

As the rail system is excellent in Japan, travelling by bus is not a preferred means of getting around. However, bus transport can be a useful way to travel if you wish to reach a destination that is not served by the rail network. The Hiroshima Bus Terminal is located in the Kamiyacho district.

Within the city, there are regular tour buses that take visitors to the Itsukushima Shrine, A-Bomb Dome and Peace Memorial Museum, together with many other sights. These are available most days of the week and last the entire day, with a hotel pick up normally included in the price. 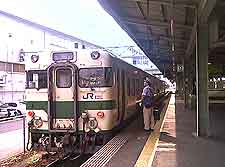 Rail services into the city of Hiroshima are operated by West Japan Railway Company. Train transport is one of the fastest and most convenient ways to travel between destinations in Japan, with modern Japanese trains being amongst the best in the world.

There are different ticket fares for adults and children, and discounts are available for round trips, with tickets available for purchase at all stations. Rail passes are also on offer and suit tourists who plan to use the rail network extensively during their stay. Hiroshima Station stands on a main rail line, which travels the entire length of Honshu, connecting Tokyo, Kyoto and Shin Osaka.

There are many reputable taxi firms within the city of Hiroshima, with travel by taxi being a convenient, although sometimes expensive form of transport. Those short on time can hire a taxi for a negotiated length of time to take them around the sights. Recommended taxi firms include Yoshijima Taxi (tel: +81 082 241 9387) and Tsubame Kotsu (tel: +81 082 221 1955). Not all taxi firms provide English-speaking drivers, so it is worth checking in advance, while rates also vary between companies.