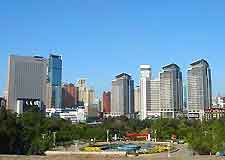 Dalian is a particularly important and developed area of industry within the People's Republic of China and stands on the north-eastern side of China, to the north of the Great Wall. Located close to the southernmost tip of the Liaodong Peninsula, Dalian stands alongside the Yellow Sea and has become a wealthy and prosperous city. Dalian offers an instantly recognisable holiday atmosphere and is well developed with tourists in mind, containing many modern shopping malls, stylish high-rise buildings, large expanses of parkland and several surrounding sandy beaches, on the southern side of the city.

The true hub of Dalian is based around Zhongshan Square, on the eastern side of the city centre, while the train station lies nearby and to the west of the square, and the busy ferry terminal to the north-east. Dalian's stunning coastline is one of the main reasons that tourists choose to visit this part of China. 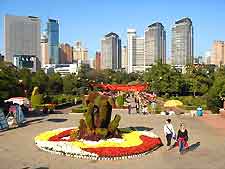 Dalian is home to the biggest harbour in north-eastern China and two superb aquarium attractions. The tourism industry in the city is well developed and the China International Travel Service (CITS) on Changtong Jie, is situated to the west of the hilly Labour Park, known for its enormous football sculpture and city views. You can expect all of the usual tourist information and leaflets at the CITS, making this a great place to visit at the start of your holiday. 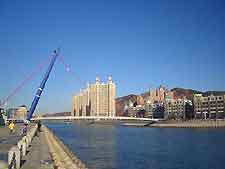 The city of Dalian is full of dramatic landmarks, both modern and historical. Be sure to look out for the Erlingsan Gaodi - a tall mountain with a prominent bullet-shaped monument perched at the very top; Fairy Lake - a particularly beautiful lake surrounded by green hills; Port Arthur - a noteworthy naval base known for its role during the Second World War; Dalian's Lushun Prison - offering information about what it was like for the huge numbers of political dissidents once imprisoned here; Renmin Square - also known as People's Square and featuring grassed areas and seating areas; and Russian Street - a vibrant part of the city and a true slice of Russia, bursting with art galleries and restaurants. More information about Dalian Landmarks. 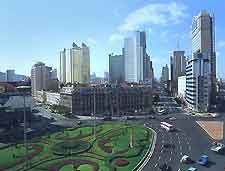 Various museums and notable art galleries reside in the city of Dalian. The most memorable include the Prehistoric Life Museum and its archaeological exhibits, the Tiger Beach Naval Ships Exhibition Centre, China's biggest Waxwork Museum, and the Dalian Art Gallery, with both permanent and temporary exhibits. Also worth a visit is Dalian's China Martial Art Hall, which is full of information about local martial arts, and the Lushun Exhibition Hall, housing around 30,000 artefacts and important treasures. More information about Dalian Museums and Dalian Art Galleries.

Although a holiday in Dalian is more than enough for many visitors to China, other choose to venture outside of the city's boundaries and explore the many neighbouring cities and tourist destinations. Particularly close to Dalian, Dandong is a huge city and a great place to enjoy pleasure boat cruises and a walk along the Tiger Mountain stretch of the famous Great Wall. Also nearby, the spreading metropolis of Shenyang is home to many magnificent tombs, shrines and pagodas, together with excellent Botanical Gardens. More information about Dalian Attractions Nearby.