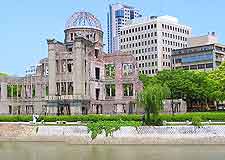 Hiroshima Prefecture is blessed with several areas of natural beauty, which are worth exploring, while historical landmarks such as Hiroshima Castle are must-sees. Those interested in Japan's religious landmarks will find the Kinko Inari Shrine fascinating.

The A-Dome at Peace Memorial Park is clearly Hiroshima's most significant monument, representing the horrors of the atomic bomb and calls for world peace. 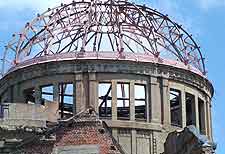 Address: 1-10 Otemachi, Naka-ku, Hiroshima, 730-0051, Japan, JP
A striking landmark famous throughout Japan, the Hiroshima A-Bomb Dome (Gembaku Domu) is a reminder of the city's past and was once a striking building used by the government. These ruins can only be observed from the outside and are especially dramatic at night, being floodlit. The A-Bomb Dome is now a World Heritage Site and can be found in the city's Sarugaku-cho district, separated from the nearby Peace Memorial Park by the river.
Open hours: daily - 24 hours
Admission: free 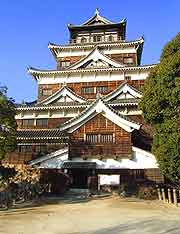 Address: 21-1 Moto-machi, Naka-ku, Hiroshima, Japan, JP
Tel: +81 082 221 7512
Visitors can stroll around Hiroshima Castle, which has a 1.5-km / 1-mile path that surrounds it. Children will enjoy the on-site play park, which is a pleasant place for adults to sit at too. The moat, which encircles the castle, is home to fish and turtles, and these are often easy to spot. In spring, more than 300 cherry trees burst into bloom here and provide a breathtaking spectacle. There is also a museum documenting the history of Hiroshima Castle and the city, housing a reconstruction of the 16th century Donjon and some interesting pieces of amour. The views from the top are well worth the admission fee.
Open hours: daily - 09:00 to 18:00
Admission: charge, discount for children

Constructed by Terumoto Mori as a mortuary chapel for his mother, the Kinko Inari Shrine Myojoin served as a place of prayer for the leaders of the Asano Clan, former feudal lords. The most interesting aspect of the shrine is its 47 wooden images of Akoroshi (masterless samurai from Ako) that are enshrined here.
Open hours: call for details
Admission: call for details

Inland from Hiroshima, the Sandankyo Gorge and the area around it are known for their natural beauty and limestone rock formations. A favourite terrain for hikers, boat tours offer a great way to sightsee and provide access to the 11-mile / 18-km long gorge and a particularly awesome 30-metre / 98-foot waterfall.
Open hours: call for details
Admission: no charge