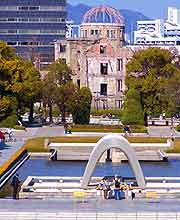 Sitting at the mouth of a delta on the east coast of Japan, ultra-urban Hiroshima is a unique city that is broken up by the Ohta waterways, which make their way to the harbour.

The central districts of Hiroshima are of the most significance to tourists with regards to accommodation.

However, the less busy suburbs also make comfortable places to stay. Many of the attractions are located outside the centre of Hiroshima, so it pays to consider access to public transport when deciding on where to base yourself.

Hiroshima's main districts and notable neighbourhoods are detailed below. 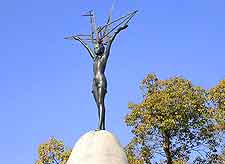 A popular place to stay, the districts of both Fukuro-machi and Naka-machi have plentiful accommodation, including the well-known ANA Hotel. It is also a shopping hub for those looking for fashionable clothing, while in addition there are a number of impressive dining outlets and interesting boutiques. Just south of these areas is Peace Boulevard, which extends to Peace Memorial Park, Hiroshima's number one attraction.

These centrally located districts are busy, but slower paced than Nagerakawa and Hondori. There is a major shopping mall here, as well as dozens of eateries, which are amongst the area's main draws. As popular areas to stay, there are plenty of affordable hotels within the districts of Hacchobori and Nobori-machi, often being sited close to the action. 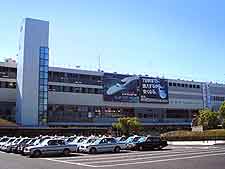 The area around Hiroshima Station is busy with businesses, hotels, shopping malls and eateries, making it a comfortable place for tourists to stay. Trains arrive at the station from many other major Japanese destinations, while trams are available to the city centre from out front.

To the west of central Hiroshima, Kamiyacho is primarily a shopping district. Host to some of the city's major shopping centres, here you will find Sun Mall, a fashionable mall targeted at Hiroshima's youth, and SOGO Department Store, selling modern items as well as traditional kimonos, amongst other outlets. Hiroshima Bus Terminal is also located in this lively district. 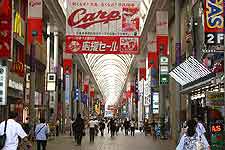 This is one of the city's most electric experiences, with Nagerakawa's flashy neon lights advertising everything from eateries to entertainment joints and bars, each of which are packed into any tiny crevice available. The shopping centres ensure that these districts are swarmed with bargain hunters by day, but at night, it is Hondori's bars that are the attraction.