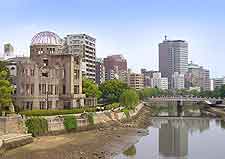 A bustling, affluent and extremely prosperous city in south Japan, Hiroshima stands proudly on the western side of Honshu island, in the Chugoku area. Hiroshima is most famous for its devastating atomic bomb attack in 1945 and whilst the city's poignant Peace Memorial Park will always been a prominent memory of this event, Hiroshima quickly bounced back. Today, Hiroshima is amongst Japan's most appealing tourist destinations and each year is visited by travellers from all around the world.

A truly international city founded at the end of the 16th century, Hiroshima is sited next to the Seto Inland Sea and the Ota River, which meanders around the city, dividing it into six island areas. The majority of Hiroshima is completely flat and easy to travel around, with an excellent streetcar service and also a popular tram, which connects the Miyajima port.

Two comprehensive tourist information offices operate in the city of Hiroshima and reside in the JR Hiroshima Station, at either end. With English-speaking staff and a range of tourism advice, these tourist information centres are always a good place to visit as soon as you arrive in the city. Those arriving by ferry will also find an additional tourism bureau at the port of Ujina.

A surprising number of tourist attractions are to be found within the boundaries of Hiroshima city, suiting visitors off all ages. For families, the animals at Asa Zoological Park are sure to make for an enjoyable day out, while the regular games at the Municipal Baseball Stadium always draw large crowds. Rather unusual is the Hiroshima New Zealand Village, where the country of New Zealand has been recreated in its own special way. 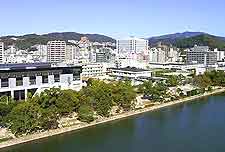 Around the city of Hiroshima, you will find many well-used green spaces, none of which are more important than the famous Peace Memorial Park, where various statues and monuments reside. For traditional Japanese landscaping, the Shukkeien Garden is hard to beat and boasts tea houses, ponds and bridges. Also of interest is Hiroshima's Hijiyama Park, where a walking trail, play area and many outstanding cityscape views await. More information about Hiroshima Tourist Attractions.

A diverse selection of landmarks are to be found around the city of Hiroshima, with the A-Bomb Dome being particularly famous and next to the Peace Memorial Park. Also look out for the striking Big Arch stadium, where many soccer games take place, and also the historic Hiroshima Castle, which was once the home of the feudal lord and dates back to the end of the 16th century, being rebuilt in 1958. Also worth looking out for is the Kinko Inari Shrine Myojoin, where almost 50 images of the Akoroshi samurai are enshrined. More information about Hiroshima Landmarks. 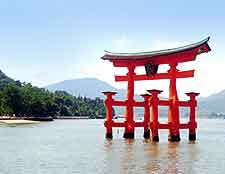 Cultural attractions abound within the city of Hiroshima and many of the best come in the form of grand museums and local art galleries. Highlights include the Hiroshima Peace Memorial Museum, which contains information about the devastation caused by the atomic bomb, the family orientated Culture and Science Museum for Children, and also the rather unexpected Hiroshima City Comics Library, where you will find almost 80,000 different comics of all description. For art lovers staying in this part of Japan, the Hiroshima City Museum of Contemporary Art, the Hiroshima Museum of Art and the Prefectural Art Museum will all be of interest and each have something unique to offer visitors. More information about Hiroshima Museums and Hiroshima Art Galleries. 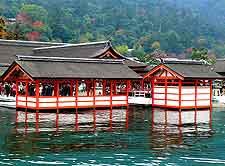 With plenty to keep even the keenest traveller occupied, Hiroshima is full of sights to see and places to visit. However, if you are looking to stretch your wings, various popular tourist destinations and towns are close to Hiroshima, such as the beautiful island of Miyajima, the capital city of Iwakuni, and the alluring city of Takehara City, which is a popular daytrip and often known as 'Little Tokyo'. Also nearby is the charming town of Hagi, which lies to the west of Hiroshima and is home to a number of important shrines, temples and a ruined castle. More information about Hiroshima Attractions Nearby.