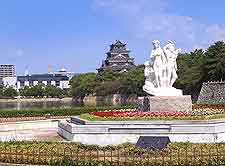 A further parkland highlight is the Fukuro-machi Park, which can be found in the very heart of Hiroshima, while various parks are also located around nearby Miyajima, including the seasonal Momijidani Park. Details of Hiroshima's main parks and gardens, together with their many attractions, are shown below. 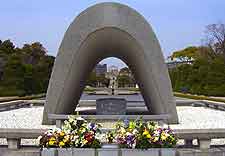 Address: Nakajima-cho, Naka-ku, Hiroshima, Japan, JP
Tel: +81 082 247 6738
Memorials related to the bombing are all clustered around the Peace Memorial Park, including the nearby Hiroshima Peace Memorial, better known as the A-Dome, the city's most significant landmark. Before the war, this building was one of the city's most loved. After the bombing, its structure was one of the few remaining in the city, and was later declared a UNESCO World Heritage site. Also within the park itself is the harrowing Peace Memorial Museum, detailing the aftermath of the bomb; the Cenotaph, listing the names of the victims of the bomb; the National Peace Memorial Hall, another museum showcasing recollections from survivors; and the Statue of the A-Bomb Children, which is continually shrouded in origami paper cranes.
Open hours: dawn to dusk
Admission: charge for some attractions

Address: Momiji Valley, Miyajima-cho, Hiroshima Prefecture, 739-0500, Japan, JP
Tel: +81 082 944 0008
Momijidani Park is located out of Hiroshima city at nearby Miyajima, at the foot of Mount Misen. Noted for its exceptional beauty during the autumn season when the leaves change colour, the park takes its name after momiji (maple leaves). Previously sited elsewhere, the park had to be moved as it was continually targeted by avalanches. Now situated in an artificial valley, the creators paid great detail to ensure that the park kept its natural shape and appearance.
Open hours: daily - 24 hours
Admission: no charge 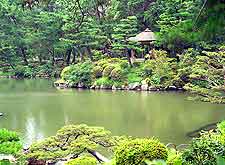 Address: 2-11 Kami-nobori-cho, Naka-ku, Hiroshima, Japan, JP
Tel: +81 082 221 3620
One of Japan's most beautiful landscaped gardens, Shukkeien is well worth a visit for its tranquillity, ponds and bridges. Paths wind their way through the garden, past waterfalls and on to attract Japanese teahouses. Situated behind the Prefectural Art Museum, combined admission tickets are available and allow you to access both attractions. The Shukkeien Garden offers different treats in every season. In spring, the cherry blossom is in full bloom, while autumn sees the vibrant colours of the leaves changing, and winter a light covering of snow. During the summer months, the trees turn green again and the flowers come alive with scent.
Open hours: daily - 09:00 to 18:00
Admission: charge, discount for students

Address: Fukuro-machi 9-chome, Naka-ku, Hiroshima, 730-0036, Japan, JP
Whilst the centrally located Fukuro-machi Park is not really worth searching out, it does provide a convenient place for a quite bite to eat, a more elaborate picnic, or simply somewhere to relax, away from the city crowds. This park is particularly popular with local youths and has a definite young vibe.
Open hours: daily
Admission: charge

Address: Hijiyama Koen, Minami-ku, Hiroshima, 732-0815, Japan, JP
Known for its mountainous landscape and impressive vantage points, Hijiyama Park boasts a range of forested areas and plenty to suit all ages. For the children, a playground and refreshments are sure to please, while for grown-ups, various landscaped areas, observation decks, and a walking trail lined with statues await. Hijiyama Park is also home to the city's noteworthy Museum of Contemporary Art.
Open hours: daily - dawn to dusk
Admission: charge