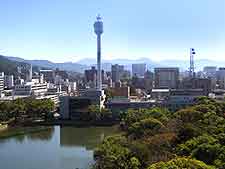 Famous for its freshly caught seafood and its many, many restaurants, the city of Hiroshima has gained quite a reputation for fine dining, with dishes often using fish and other creatures caught from the surrounding Seto Inland Sea. Oysters have become a particular speciality at many restaurants in Hiroshima and are especially popular with locals, with an oyster festival taking place each year in February. Also worth noting, the local 'hiroshima-yaki' savoury pancakes are not to be overlooked and are made with eggs and buckwheat noodles.

There are literally hundreds of restaurants all around the city, together with approximately 4,000 bars, many of which also serve a variety of basic snacks and may feature live entertainment. If you fancy a change from the endless Japanese cuisine that surrounds you in Hiroshima, then consider one of the many international restaurants, where dishes are a million miles away from noodles and include pizzas, pasta and even curries and other Indian cuisine. 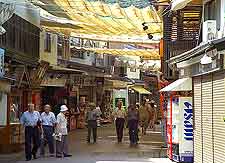 No trip to Hiroshima is really complete without dining at one or more of the city's many traditional Japanese restaurants, where chopsticks, waitresses wearing kimonos and a rather hectic atmosphere are all part of the fun, becoming even more enjoyable after a few glasses of sake (rice wine).

You can except to find plenty of local rice and noodle based dishes, together with lots of other choices.

Oysters are so popular in Hiroshima that they are found everywhere and can even by sampled at outdoor stalls, also with other prepared seafood, including shrimps and crab. The nearby island of Miyajima is also a good place to find seafood restaurants, countless sumptuous oysters and many other local delicacies. 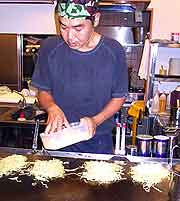 Much of downtown Hiroshima is overflowing with restaurants and in particular, the Okonomi-mura area is a great place to visit. Located along the Shintenchi Nakaku in the Okonomiyaki Village area, the Okonomi-mura comprises more than 30 different small restaurants, which are located on the second, third and fourth floors of the Shinyenchi Plaza Building, in close proximity to Hiroshima's grand Parco Department Store. The food in these bustling dining venues is all very much Japanese in theme and almost secondary to the rowdy and authentic atmosphere.

The ever-changing dining scene around the Nagarekawa is worth investigating and restaurants and bars in this part of Hiroshima line many of the winding backstreets and alleyways, being nearby a number of top nightclubs and lively bars. Hiroshima's numerous shopping centres also provide a good place to eat out, with Pacela shopping complex featuring several extensive food courts, and further restaurants at both the Alpark shopping centre in western Hiroshima and the Asse mall close to the train station.