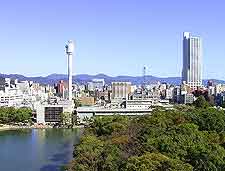 Hiroshima is a fairly compact city and as a result, many of the main hotels stand within walking distance of the central attractions and restaurants. The accommodation in central Hiroshima itself varies greatly in size, quality and price, with popular budget options including the Aster Plaza International Youth House on the southern side of Peace Park being especially popular.

Also suiting those looking to save the pennies, the Hiroshima Youth Hostel may be basic and slightly outside of the city centre, but it is extremely affordable and easy to reach by bus. Many people choose to stay at the World Friendship Centre, which offers a small number of Japanese-style guest rooms. 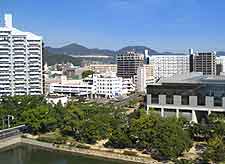 A number of top hotels lie close to the winding Ohta River, which leads all the way to the Hiroshima Harbour and divides some areas of the city. To the north-east of the city centre, many hotels and cheap accommodation can be found within close proximity of the Hiroshima train station and the district's numerous shopping centres.

Further hotels can be found within the neon central district of Nagerakawa, alongside many lively bars and excellent eateries, while slightly to the west, the Hiroshima's Hondori neighbourhood is a great place to shop and does also offer some reasonably priced accommodation. 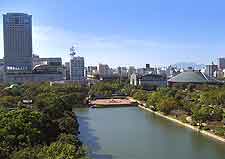 The area surrounding both the Nobori-machi and Hacchobori contain a number of conveniently centrally located hotels. Slightly to the south and close to the Hondori Arcade you will find a host of hotels around the Naka-machi and Fukuro-machi stretches, with the top-end ANA Hotel Hiroshima standing out of the crowd. Nearby, the Hotel Hokke Club Hiroshima provides more affordable mid-range accommodation and stands to the east of the Motoyasu-gawa and just a short walk from the Peace Park.

Other excellent hotels in Hiroshima include the Sera Bekkan Hotel on Mikawa-cho Naka-ku, close to Fukuro-machi-koen, where a traditional Japanese restaurant is one of the main attractions. The Rihga Royal Hotel Hiroshima can be found along the Moto-machi and also offers a high standard of accommodation and superb night-time scenery, being the city's tallest hotel.